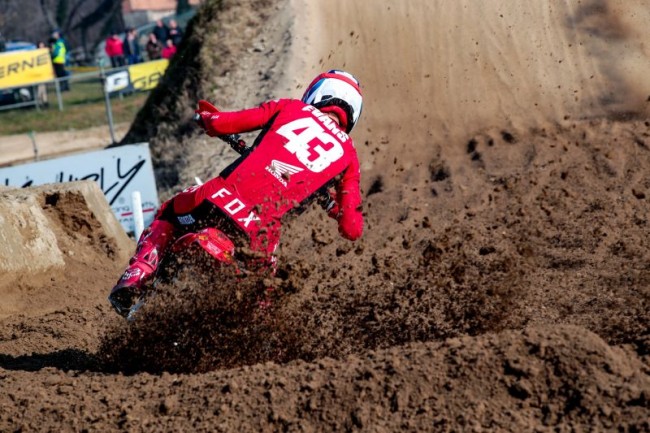 22-year old Australian Mitch Evans easily caught the eye at the beginning of 2020 and his debut year in the MXGP class and as HRC teammate to eventual world champion Tim Gajser. Evans jostled for podium spots in the season-opening British Grand Prix before eventually finishing 5th overall. Injury then struck immediately with a dislocated shoulder in Holland for round two and then again with a broken left wrist at the Spanish Grand Prix in October.

Evans elected to return to his native country to have further check-ups in the winter and discovered that the break – caused by a heavy landing from a double jump at Intu XanaduaArroyomolinos and initially fixed with an operation in Milan – was far more serious than he’d realised. “It was actually a lot worse than what they made out and from what we could tell from the x-rays and MRIs,” he admitted. “When I went in for surgery I was told it would be an hour, and three hours later I came back! The surgeon in Australia explained how bad it had been.”

Evans convalesced at home and after passing through Australia’s strict two-week quarantine period for international arrivals where he was confined to a hotel. “Some days would go fast, others would take forever,” he remembers. “Once you got out though it was so worth it, and to be there for two months was great.”

#43 started riding back in Italy in early March after another five-month hiatus from the CRF450R. As in 2020, Evans has been fortunate with MXGP calendar delays to be able to have time to recover, re-train and get back into shape. The bright form from the 2020 British Grand Prix is long overdue.