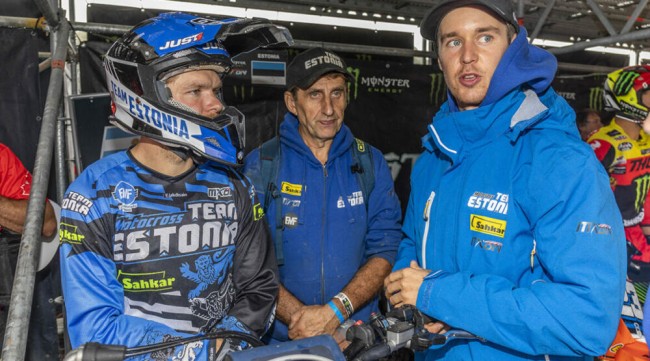 On September 24, 2022, the team world champion in motocross will be decided for the 72nd time in the USA, at the Red Bud cross track, and this year Estonia will be represented in the competition by Tanel Leok, Harri Kullas and Jörgen-Matthias Talviku.

According to manager Martin Arumäe, the selection of team members has been pleasantly difficult this year, because we have so many good riders at the international level. The final selection of riders was made, taking into account the riders’ latest results and speed in both foreign and Estonian title races.

For Tanel Leoki (MXGP, Husqvarna, Sõmerpalu MK), this is the 20th time he represents Estonia at the National Cross, and it is an achievement that no other cross-country rider in the world has reached. Although at the beginning of the season Leok planned to give up competing at the level of international title competitions, today the plans have changed and he has also improved his form by the end of the season.

Tanel Leok: “Yesterday I received a call that they want to represent me in the national team. It took some thinking and digesting for a while, but I was okay with it. At the beginning of the year, the plan was to do the last World Championship in Kegums and withdraw from the competition. But at exactly the same time, a German team contacted me and offered support to me and my boys, Travis and Sebastian. I decided to accept the offer. I’m slowly getting in shape, and the Husqvarna testing also helped, with a lot of driving lessons.”

If Leok was not sure of himself a month ago, at the last ADAC stage of the German championship he already felt better, but not super. Later, with the support of sponsors, Leok took part in the World Cup stage in Finland, which was both a physical and mental test for him, whether he could surpass the other candidates.

“Finland went well and I was contacted about joining the team. I said that I want to participate in the stage of the Tihemets Estonian championship to see where I am. I won the time trial in Tihemetsa and I was satisfied with myself. Of course, the first race did not go well and I fought with Gert Krestinov for a long time, it was not easy to pass him and I finished the race second after Hardi Roosioru. The second race felt very good and I won. I was also lucky because Hardi’s rear wheel broke on the last lap, but I didn’t have a problem-free cycle either.”

“I want to be honest and I wouldn’t accept this invitation if I didn’t have speed and physique. These competitions proved to me and maybe to others that the choice is fair. Now I’ll finish the Vantaa Youth WC with the boys, and they’ll take a backseat for a while, and I’ll focus on myself until the National Cross. It will be a very special moment for me and I will be honored to represent Estonia.”

Jörgen-Matthias Talviku (MX2, Husqvarna, Pärnu Motoclub) is in the national team for the second time: “I am very grateful that I was selected for the team and I will represent our Estonia with honor at the Cross of Nations. I am very happy to be in a team with such experienced drivers as Tanel and Harri. Previous experience is very important in this kind of competition and it can be said that one of the dreams is about to come true to share a team with such men! We have a strong team and I am also richer in experience than last year’s first time at the National Cross. I’ve also ridden on US tracks and that comes in handy too! The team definitely cooperates well with manager Martin, I already experienced that last year, and I’m really looking forward to competing in Red Bud! Thanks to everyone involved!”

Harri Kullas (Open, Yamaha, Pärnu Motoclub): “It is a great pleasure to be in the Estonian national team again. My season has gone quite well, so it’s nice and an honor to be able to represent Estonia again!
The team is great, like every year. I have raced with Tanel several times at the National Cross, he is very necessary in the team with his experience. I also know Jörgen very well, so the communication and cooperation of our team is super good. It’s very cool that this year we have so many selection options from such a small country, and since the men were very equal, Tanel’s experience played a very big role in the selection.”

The Estonian national team debuted at the world team motocross championship in 1993 in Austria. In three years, 2004 in Lierop in the Netherlands, 2015 in Ernées in France and 2019 in Assen in the Netherlands, the Estonian national team achieved an extremely high fourth place in the competition of the world’s major cross-country countries. 15 times, the Estonian team has finished the competition in the top ten and four times in the top six.