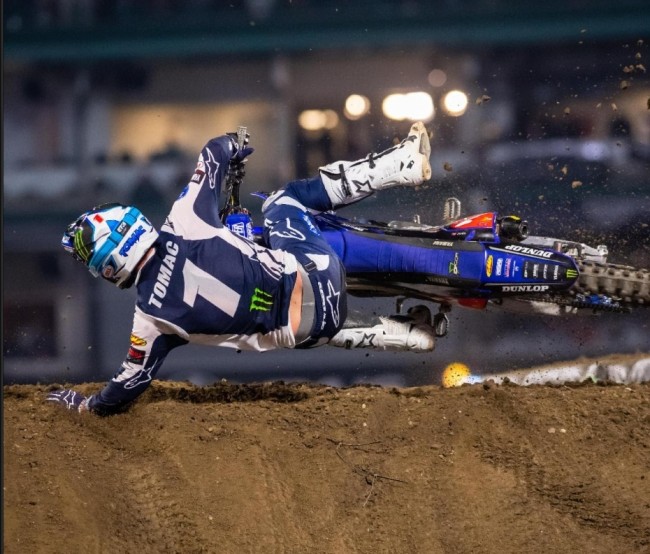 After a decade of trying, Eli Tomac finally got that A1 win – even if a crash threatened to ruin it all! Eli spoke in the press conference about taking that win but also about what went wrong to cause the crash that forced him to come back through the top five to the top of the podium.

Tomac said: “This is my tenth Anaheim 1 in the 450 class, so apparently it took me ten times to figure it out, (laughs) how to get everything to go the right way for round one, and from pre-season to the race itself. But overall, that was just a wild race. Early battling with Justin there and then crashing up the tunnel jump.

Tomac with a mistake over the bridge! 👀

“I just got a little bit in the backseat of my bike, washed the front end up,” explained Tomac on how he went down. “And then, thankfully, everything stayed straight. Bars and my clutch was good. I was able to stay within a touch of the front.

In an indication on just how tough the track was Eli said: “The track was probably top three on just pure gnarliness, the way the transitions were. You had to time the jumps literally perfect or you’re launching off the track and making mistakes. But overall, such a good start for us, especially on this new platform.”