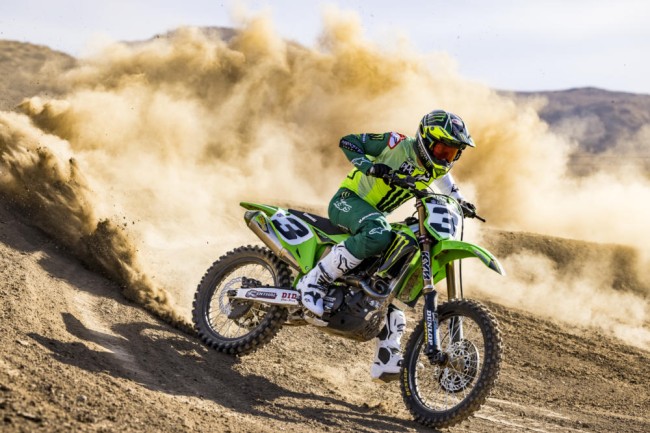 It will be his final series with Kawasaki and the three-time 450 US outdoor champion, Eli Tomac, insists he still is motivated to win and wants to relcaim the number one plate outdoors.

Speaking in the pre-season press-conference Eli said. “I’ve got one goal as always and it’s trying to win. So, it definitely sucks getting both #1 plates taken away from you, so that’s my motivation at this point is to get one of them back and do my best to do that. Give my best shot, my best try. Going into this season feeling good right now. Yesterday’s ride at Pala was nice. We got that Tuesday in, so looking forward to Saturday.”

Tomac said last season was a “weird year” and is glad to be going back to the traditional 12 round series: “Yeah, it was a weird year but at the same time you’ve got to deal with it. It is going to be nice just to go back to the normal twelve rounds that we normally have. It feels a little bit more normal this year. We all lined up last year the same way on the same gates and that’s that. I am looking forward to going to all the rounds. We’ll just see. You never really know what happens coming into round one, or where everyone is at. We’ve just got to go race Saturday and see where everyone is at.”

And Eli wants to start the season strong: “I like to come out with a good score. That’s always the goal for me is to come out podium and kind of roll with momentum. I’m not a big fan of playing catch-up. I’ve done it a few times and it gets harder and harder as the season goes on. I like to come out swinging, if possible. The field is deep again. It’s harder every year. The competition also changes each year. You never know who is going to be there. One thing is for sure, there’s going to be a handful of guys that are going to be hard to pass and stuff. Once again, it’s a gnarly field and it just keeps getting harder and harder every year.”

Until last season Eli Tomac was the man to beat and the man everyone else feared if he found his A game, this year there are still question marks about his raw speed – can he get back to be the dominating rider in the class and end his Kawaskai years on a high with his fourth 450 outdoor title? He certainly can’t be counted out!