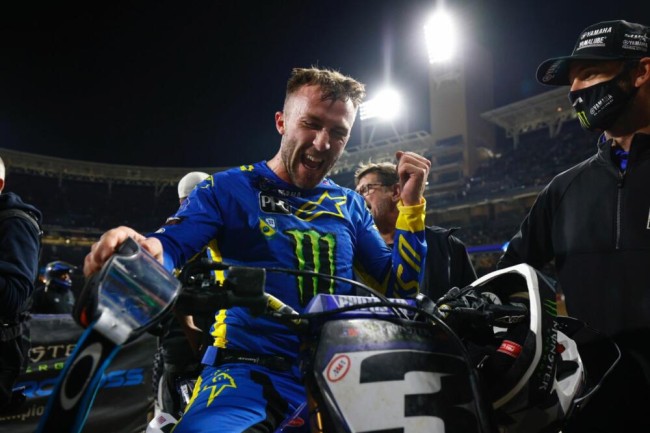 The 503th Pulp MX show managed to get Eli Tomac as a guest and after winning his second AMA Supercross 450cc title, the American opened up on his knee injury.

Tomac is very unlikely to be ruled out for the final round of the SX season but thinks he will be fine to race the AMA National outdoor season which is good news.

“So, I have a damaged MCL. Nothing else is damaged or torn on the MRI, but my MCL is torn. I guess it’s the only thing in your knee that can heal itself so now I’ve got to take the time and heal it and hopefully, not tweak it again. But for now, it is getting better every day. Actually, the hardest thing to do is squeeze a bike, because that’s the inside of your knee so that’s the point of contact and that’s the part that gets a little irritated. You know, I’m okay like in practice, then like I’m decent for a few laps but where it has been getting me is basically at the halfway mark in the main, and that’s exactly where I have been getting spit out the back. I mean you saw that in Boston and in Denver where I’m just kind of riding around. And it’s kind of effected the way I weight the bike too in the turns. So I’m hoping I can gain that strength back and that’s all I can do at this point. And looking to the future, I think I will be okay for outdoors to go ahead with it.”

You can listen to the latest pulp podcast, here.