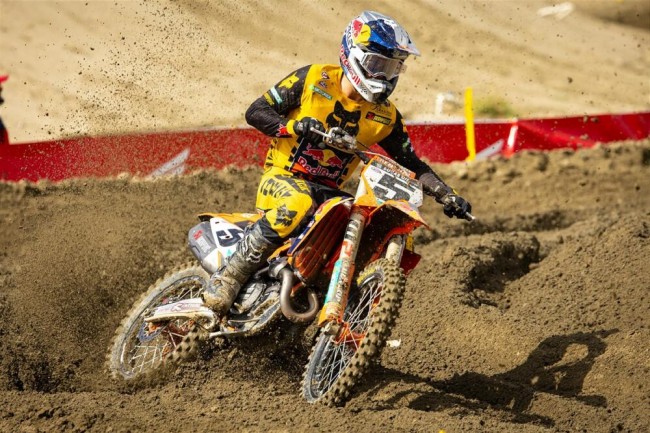 It was a sight to be had under the Red Bull KTM Factory Racing rig at Saturday’s opening round of the 50th Anniversary of the AMA Pro Motocross Championship as racing icons Ryan Dungey and Antonio Cairoli suited up to join teammates Aaron Plessinger and Max Vohland for the first gate drop of the 2022 series in Pala, California. After six years away from the outdoors, Dungey led Red Bull KTM’s charge at the Fox Raceway National with an impressive top-five result in the 450MX class, while teammates Cairoli and Plessinger swapped 6-10 finishes for seventh overall and eighth overall, respectively.

The three-time 450MX Champion stepped back into racing form right away as he positioned his KTM 450 SX-F FACTORY EDITION inside the top-five battle off the start of Moto 1. Overtaking a podium position midway through the race, Dungey showed no signs of slowing down as he fought down to the wire to secure a top-five finish in his first race back since retiring in 2017. The Minnesota native came back even stronger in race two, just narrowly missing the holeshot with a quick jump off the line. He raced assertively in third for the first half of the 30 minutes plus two-lap race, matching the pace of his full-time competitors early on. Settling into fifth midway through, Dungey remained in top form all the way through, sealing a top-five result at the season opener.

Ryan Dungey: “I’m excited to be here racing and super thankful it worked out. Going into the first moto, it was important to just let it come to me – don’t rush, don’t override, hit your marks and find good lines as the race goes on. I was able to make some passes and I was actually pretty happy with fifth. I got a really good start in the second moto and that was nice because I got to run up there with Chase and Ken and get a feel of that pace that I need to work towards. I’m actually really happy with the day and the bike, too. We made some changes going into the second moto and that really helped. For me, it’s the best outdoor bike I’ve ever ridden at KTM, so that’s really pleasing. The cool part is I see the areas I need to work on and that’s the challenge and the motivation moving forward.”

Making his much-anticipated American motocross debut, nine-time world champion Antonio Cairoli put on a great display for fans in southern California and all over the world. With an eighth-place start in the opening moto, the Italian rider battled inside a dense field of riders up front early on. He was working his way toward the top-five but a late-race crash set him back to ultimately finish 10th in race one. With a much smoother start in the second moto, Cairoli charged into the top-five on the opening lap. Battling against Eli Tomac early on for the fifth spot, Cairoli ended up moving into sixth and he executed a strong performance for the remainder of the race to secure seventh overall in his AMA Pro Motocross debut.

Antonio Cairoli: “Here at Pala, it’s a very nice debut for me. Of course, it could be a little better without the crash in the first moto but I was close to the top-five in both races. I’m really happy about how it went considering my fitness, I only started doing some race training two or three weeks ago. Before, I was just testing for the team and for R&D at KTM so I didn’t really have the plan until one month ago that I would race here. It was feeling a little bit like your mind wants to do it more but you’re careful because this track was very sketchy and demanding so you need to just take whatever comes and we build up a little bit race after race.”

Cairoli added on Instagram: “Excited to line up again today after a while,pretty ok with the result considering the big hit on the first moto while sitting on 6th place and the amount of training we have had the last month 😅

“Thanks KTM USA for the great work and the @promotocross fans for such an amazing welcome! Can’t wait for #hangtown.”

Aaron Plessinger also made an anticipated return back to racing but unlike his teammates, Plessinger’s time off the bike was due to an injury sustained earlier this year in supercross. With a strong entry, the Ohio native collected a great start aboard his KTM 450 SX-F FACTORY EDITION and he set charge to catch Dungey within the first few laps. The KTM duo pushed each other to climb into the top-five battle and despite a tip-over later in the race, Plessinger was able to finish strong in sixth. In the second moto, he battled through some fatigue in his previously injured arm but he held it together for a top-10 finish. With combined scores of 6-10 mirrored those of his teammate, Plessinger finished one position back for eighth overall.

Aaron Plessinger: “This was my first race back since Minneapolis and I had a pretty good day overall. The first moto, I actually surprised myself. I didn’t really know I was going to be that fast, catching up to Ryan and actually riding with him a little bit in the top-five. I had a little tip-over that brought me back to sixth but I felt good. Going into the second one, I knew my arm was a little bit tired so I wanted to get a good start and that didn’t really happen but I pushed through. It was a grind the second moto and I’m just happy I made it through. I’m also happy to be back at the races and looking forward to improving from here.”

Team rider Max Vohland had a steady start to the season, finishing just outside the top-10 overall in the 250MX class. After missing most of the supercross season due to injury, Vohland came into the opening round ready to race. In Moto 1, he struggled to break through a mid-pack start as he rounded the opening lap in 20th place. Working through the field as best he could, Vohland ultimately finished 12th. In Moto 2, he grabbed a ninth-place start and set himself up for a more competitive drive this time around. With a hard-fought effort, the Northern California native secured 10th in the second moto and 11th overall for the day.

Max Vohland: “Today went pretty good. I came out with more points than I did last year, so that’s a plus. My starts are what really hurt me today. I rode strong and hard, and I feel like I’m in better shape by far than last year, I just need to get off that gate and get a good start. We’ll definitely work some starts this week and I’m looking forward to my hometown race at Hangtown next weekend.”

The 2022 AMA Pro Motocross Championship heads north to Rancho Cordova, California next Saturday, June 4, for the Round 2 Hangtown Motocross Classic.