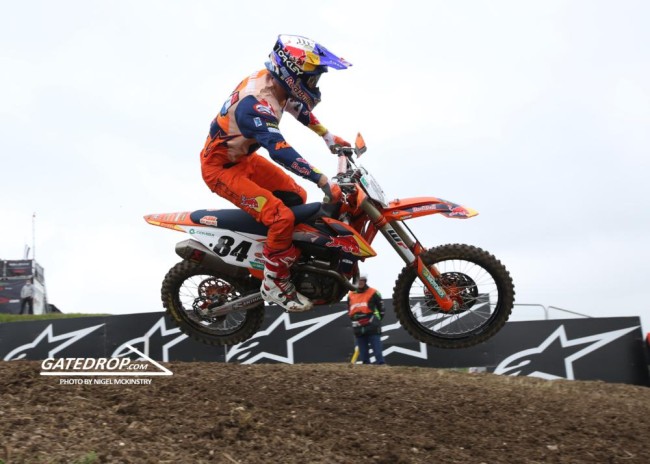 Dirk Gruebel from KTM was a guest on this weeks studio show at Loket as he caught up with Lisa Leyland and Paul Malin. Gruebel offered a further update on Jeffrey Herlings after he got landed on in Oss and the injury is worse than first thought meaning a return to Lommel is unlikely at this stage.

“The shoulder blade is cracked. Last week in the first scans it looked like a tiny crack in the middle of the blade so we said it’s not too bad and he can heal up and maybe he could be back for Lommel. On Monday, the scans got a bit jeopardized because the crack is bigger and it’s close together so he doesn’t need surgery or anything like that but we will let it rest for the moment and then take further scans after a couple of days. We will see how it goes but Lommel for me, is a no go, this is clear, it’s too early. He will use all the bone stimulation stuff that is out there and he’ll change a bit the nutrition to get the calcium going but there’s not much you can do with a broken bone. The most important thing you need is time”.

Gruebel also commented on the incident where he got landed on and why the start device didn’t pop out meaning Herlings didn’t get the drive anticipated – pure bad luck!

“Since we started on the metal mesh gate, it’s (the start device) really low down for everybody, all the riders to prevent them from wheelieing. If you have an up hill like here (Oss), then it doesn’t pop out and then down the hill there was no breaking bumps so it still didn’t pop out. Wheelieing up the hill he was using the front wheel to tap over the waves, it’s not enough since it’s sand.  The next jump it popped out so it took away the force for the jump let’s say so he was a little bit shorter but not that much. As you can see Romain (Febvre) jumped the same level, Ivo (Monticell), I don’t know, he just launched it completely and then there was nowhere to go”.

Herlings has won in pain in the past at Latvia but on that occasion he didn’t indicate to the team he was in pain despite riding with a broken ankle. This time he made it clear to the KTM team he was in a lot of pain but still somehow won the moto – Gruebel who knows just how tough the four times world champ is wasn’t even sure if he’d survive the distance never mind win – a mind-blowing moto win! 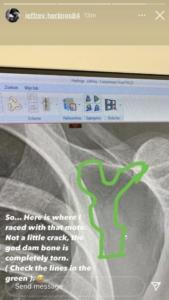 “It’s hard to believe. That time in Latvia we didn’t know anything, he just said he had pain but this time it was clear, he showed us there was something wrong. Jeffrey Herlings is usually not a guy that shows you anything normally, he has such a high pain level and he just goes through stuff you cannot imagine. This time he showed us and he let the shoulder hang a bit once in a while. I thought midway through the race, man I don’t know if he can survive the whole moto. But then when he got closer to them he even picked it up, he plucked them one by one and winning that race, this is something outstanding. If you talk with people about a broken shoulder blade, they tell you it’s like having a knife in your back and he was riding Motocross with it”.

You can watch the studio show below as it also features Kay de Wolf and Brent van Doninck.