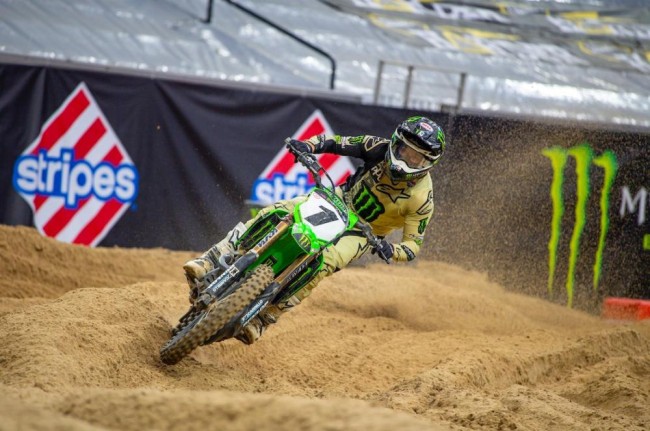 A year ago Eli Tomac took the momentum in the championship just before lockdown at Daytona, passing Ken Roczen in a classic Tomac late-race charge for the lead that resulted not only in the win but also sole position of the red plate.

From there Tomac controlled the championship at Salt Lake City but since that long desired supercross title win, he hasn’t been quite the same. Yes, he has been fast and always one of the fastest out there but he hasn’t been the fastest very often, even with a rare good start. The defending champ just hasn’t been able to ignite the afterburners this season and that’s something, title win or not, he has been able to do for the last few years in supercross.

Has the championship quelled his thirst and need for victory by one percent? With the field this deep that is all it can take or is he just a victim of bad starts and consequential momentum swing due to a drop in confidence?

Whatever the issue, Tomac is running out of time to turn things around and stay in this championship battle. 31 points behind Roczen with nine rounds left, Tomac needs to win at Daytona and needs to try and have a ride like last year, not just to grapple the momentum away from Roczen and Webb but to bring that “wow” speed he has always been synonymous with and show himself he has the sensational speed back that everyone has feared for years.

But with the motivation Webb and Roczen have right now it won’t be easy, they are the class of the field and locked in their own duel for the title. Tomac has to find a way to outperform them even if he does manage to start up front.

With Chase Sexton back in action , the Yamaha trio of Stewart, Ferrandis and Plessginer all in good form plus Max Anstie with two weeks under his belt and a rejuvenated Jason Anderson, it should be another interesting race throughout the top ten and beyond. The racing throughout the field is something that has been great to watch this year, but all eyes will be on Tomac tonight as he enters the last chance saloon to defend his title on a track he has historically excelled on.

In the 250 class Justin Cooper is the man to beat with Jeremy Martin out, Cooper is great outdoors and this track should suit him perfectly but Hunter Lawrence could well show his form in these conditions. Seth Hammaker was impressive in his debut two weeks ago and looks like he could be the real deal for Mitch Payton – can he get a podium? Pierce Brown will make his debut for the Gas Gas squad but Daytona isn’t the easiest place to make a comeback!