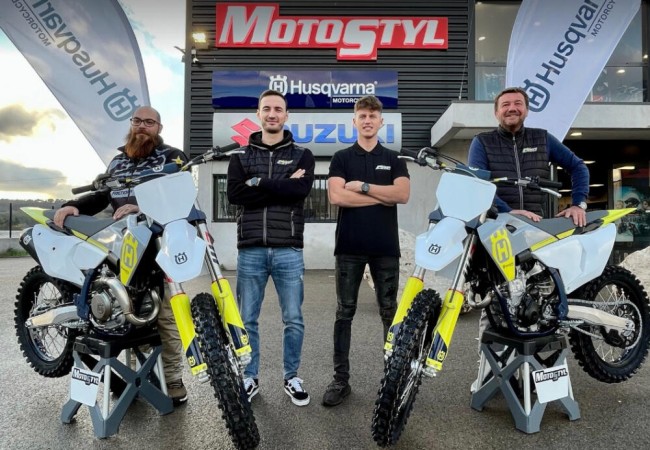 The CRC Motostyl Husqvarna team unveiled part of its line-up for the 2023 French championship season. In addition to Adrien Escoffier, Maxime Charlier is making his arrival in the team managed by Jean-Marc Charpin.

Tech 32 Racing Team rider since 2019, Maxime Charlier changes horizon after 4 seasons of collaboration with the Fabre family. After the Supercross of Dortmund – which will mark the final of the ADAC championship – during which Maxime will evolve for the Sarholz KTM team, the French rider will put on his new colours in order to attack the 2023 French championship; first stop is planned in Sommières, next February 26st.

Mainly committed on the National championships, Maxime Charlier also made some appearances in EMX250 and the world MX2/MXGP these last seasons. He finished 9th in the French Elite MX2 championship this year (despite his absence in the final round in Basly) and also made his Supercross debut in the Pro Hexis and SX Tour championships; a promising debut as Maxime finished 4th in the Pro Hexis, and 10th in the SX Tour.

Maxime Charlier: “There have been ups and downs for me in 2022. I think I had a good speed on the French Elite MX2 championship, but I was not really able to concretize in races, especially after some problems that did not make my job easier. I took part in my first season in Supercross afterwards. For a first year, it’s not too bad even if I would have liked to concretize a bit more at the end of the year; there were still some positive points with podiums in Châteauneuf and in Luxembourg, a good top speed during the training sessions even if I still have to work on the whoops to be able to mix upfront more often. After the end of my contract with Tech 32, I was able to get in touch with the CRC Motostyl Husqvarna team-manager. We quickly reached an agreement for 2023 with the help of the Motostyl dealership who is also part of the adventure; I am very happy about that. I will give my best to represent them in the French Elite and Supercross championships, as well as in international races. As for my goals, we discussed them with Jean-Marc Charpin who is above all a coach, so I will be able to benefit from his experience and his wise eye. I don’t really have any specific goals but I think there is potential; I will give it my all to try to get closer to the top of the ranking”.

For Adrien Escoffier, there’s no change in 2023. After joining the CRC Motostyl Husqvarna team this year, the French Supercross champion (SX2 – 2018) extends his agreement with the team managed by Jean-Marc Charpin. Third in the Pro Hexis championship in the 450 class this year, Adrien Escoffier also finished 5th in the SX Tour 450 championship despite a difficult end of season due to an injured wrist.

This year, Adrien Escoffier also took part in the World Supercross Championship for the Bud Racing Kawasaki team. Adrien went to Cardiff (Wales) and Melbourne (Australia) to compete in the new FIM championship, and he came back with the 10th place in this “pilote” season that saw Ken Roczen, Eli Tomac, Justin Brayton, Joey Savatgy, Vince Friese & many others compete. Adrien plans to compete in World Supercross again in 2023, but to do so he will have to join one of the 10 teams licensed by the promoter, SX Global.

Adrien Escoffier will compete in the French SX Tour Championship, the Pro Hexis, some Elite Races and some international Supercross with CRC Motostyl Husqvarna next season.

Adrien Escoffier: “We’re back for another year with the CRC Motostyl Team by welcoming Maxime Charlier in the team. It went very well this year, I had the opportunity to have everything I needed within the team and they were happy with my results, despite a complicated end of season due to my wrist injury. The goals for next year will be the same as this year, to aim for the top 3 in French Supercross championship and even aim at the title. What I want is to win races, and a title. We will have to work hard for that and have a good winter. My schedule will include the SX Tour, the Pro Hexis, some international SX and a part of the Elite to get into the groove before the Supercross season starts. Regarding my participation in World Supercross, it’s beeing discussed but nothing is done for now.”