Craig on his clash with Lawrence – it looks bad! 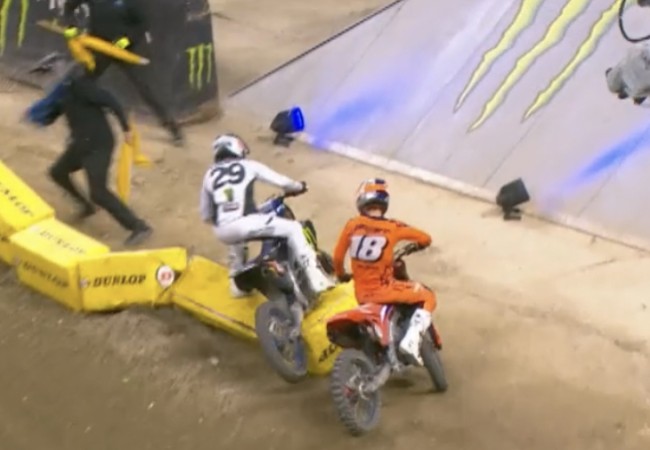 Christian Craig has given his version of events that led to he and Jett Lawrence colliding on the last lap at Indy 1 – that meant both lost a podium spot!

Craig was blamed for the incident as he took Jett and himself wide before crashing into the tuff blocks but speaking on his Vlog, Craig said: “We tangled with one corner to go. I knew he was there but not that close. When we went over the final rhythm section right before the whoops section I saw he was right next to me and he was going to turn into me and I was going to go into the whoops and we locked bars and we both ended up going straight.

“It looks on film, it looks bad on my part, that I was trying to take us both out – but it was far from that. I was trying to guard my line without him leaning into me and to guard that turn without him going underneath me. once we locked bars I was unable to grab my brakes and we just kept going straight and I hit the tuff block and went down. Everyone can think what they want, it’s all good. So I ended up fifth we are 8 points I think out of the lead but there’s still a lot of racing left.”

See the full Vlog of the Craig’s day below: