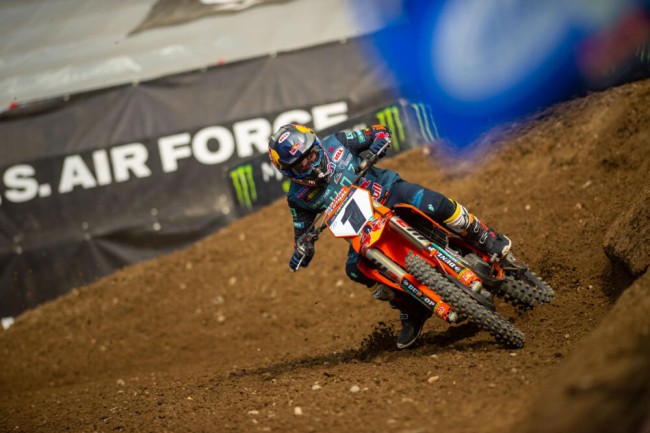 The former two-time Supercross Champion celebrated his 18th and 20th birthdays while participating to the Godfather of the overseas Events, the Paris SX. Now focusing in stadium racing after signing a new “SX only” contract with the Red Bull KTM Factory Team, Cooper will use the French Classic to launch his 2023 effort towards re-gaining the most prestigious title of all.

It will not be an easy task, as the current Champ, Eli TOMAC, will also be chasing the “King of Paris” title, and as Jett and Hunter LAWRENCE will share the same goal as well. Back with Aldon BAKER, the trainer who was at his side during his winning 2019 & 2021 seasons, riding a now fully developed Factory KTM 450 SX-F, the North Carolinian is eager to put a disappointing 2022 season behind him and to rebuilt his winning package, mix of technical finesse, physical endurance and racing mastership, topped with a huge fighting spirit.

“We are glad to welcome back Cooper to our Event, which he raced twice, while he was still a 250 racer in the US”, explains Xavier Audouard, the Paris SX Sports Director. “One can expect to see him back to his true level, after re-launching his program, and we anticipate great battles between him and the other stars that will be behind the gate. Being able to present US Champions to our event is rare, and always a treat. Cooper and Eli are great rivals, they have won the last four World and US titles and with Eli and Jett, we have two of the three current Champs – who also happen to be currently leading the Outdoor Series in both classes- lined up for this 39th edition, which promises to be an epic one! Our event gives these top Factory riders a unique chance to get some gate drops and face true race conditions, on a US-style track, in the middle of the off-season, while chasing the prestigious King of Paris title. We are glad that themselves and their Teams take that opportunity and will do our best to honor their commitment”.