Cooper Webb on another win: A huge confidence booster for me 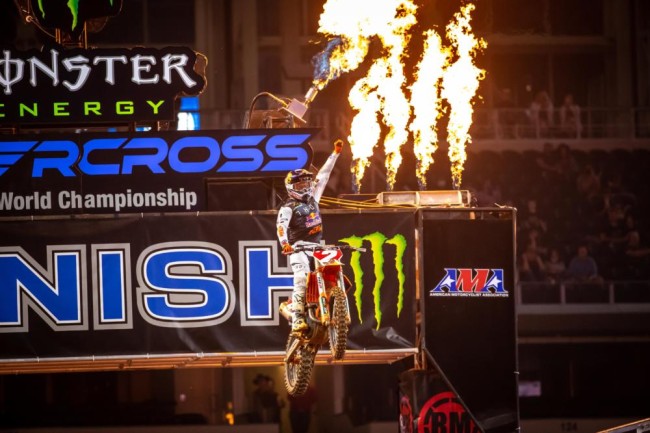 Red Bull KTM Factory Racing’s Cooper Webb continues to keep his momentum rolling in Arlington as he raced his way to another wire-to-wire victory in Tuesday’s 450SX Main Event. With back-to-back wins through the first two rounds of “residency” in Texas, Webb now carries a 12-point championship lead into Round 12 of the 2021 AMA Supercross Championship on Saturday where he looks to make it three-for-three in the Lonestar state.

Webb had a humbling start to the day when he experienced a hard crash in the whoops during practice but the 2019 450SX Champion managed to make a full rebound as he entered the night show third overall in qualifying. In 450SX Heat 2, Webb shot off the line aboard his KTM 450 SX-F FACTORY EDITION to assume early control of the race. He rode a mistake-free race, leading all eight laps to claim his second heat race win of the season and prime gate pick heading into the Main Event.

As the gate dropped for the Main Event, it was Webb who once again powered his way to the front with a convincing holeshot and early lead. Defending champion Eli Tomac settled in behind Webb and applied constant pressure throughout the 24-lap race but Webb didn’t break as he came away with a comfortable margin of 4.634 seconds upon crossing the checkers.

Webb: “That was a huge confidence booster for me, to lead the whole race again with that amount of pressure. Eli was probably the faster guy tonight but I just tried to hit my marks and not make any mistakes. After that [practice] crash today, sometimes it’s good for you to get those big hits, get that fear back in you and ride the thing that kicked you off. I’m super pumped on that Main Event, to battle with those guys and be able to lead wire to wire, it’s awesome.”

Teammate Marvin Musquin did not line up on Tuesday after suffering a hard crash during his heat race on Saturday. The French rider received stiches immediately after the race and doctors later confirmed that he did not sustain any broken bones; however, due to the quick turnaround in the series schedule, Musquin was not cleared to race as soon as today. Upon clearance from the medical staff, Musquin looks to make a return on Saturday for the final round of racing in Arlington, Texas.