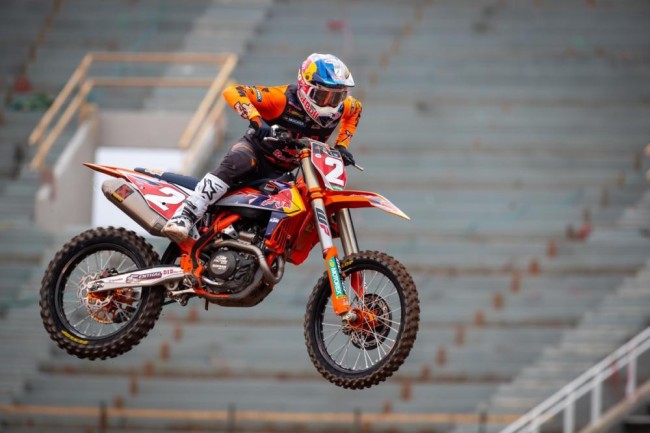 It was another great weekend in the points from Cooper Webb just when it looked like he was about to lose vital championship points. But when Roczen crashed out of the lead again , Webb kept his composure and extended his lead to 22 with one round remaining. The Red Bull KTM rider talked about his night in Salt Lake City with the media below:

Coop, you had a good night. You found some momentum with seven minutes left in that main event. Talk about what made that surge. What did you find out on the track here tonight?

Like you said, late in the main it was really good. I didn’t get the greatest start tonight. The track was key to get that good start. I was around eighth or so in the first turn and made some quick passes to get around some guys. Felt for the second lap I was around fourth or fifth. Made some passes and got behind Jason [Anderson].

It was me, Jason, and Mookie for a while, all kind of in that pack and trying to move forward. Was able to get around Jason, which then kind of set my sights on the lead two guys. I had some good laps. Was able to close the gap with a solid second place. Overall I’m happy and great for the points. It was a hard-fought second place, so we’ll take it.

That was a hard-fought race. You have your teammate in front of you. Your championship rival goes down. What was it like for you to chase Marvin [Musquin] like that and know, “I’m going to have to do this the whole way. He’s not going to pull over. I’m going to have to earn this one.” And even then, it wasn’t going to be enough?

Like you said, it was kind of a sigh of relief honestly when Ken went down because I felt like me and Malcolm and Jason were riding a really good pace. Those guys kind of got away early with the better starts, but I felt like we were slowly but surely kind of catching on. When Kenny went down, I think it was kind of like a sense of urgency for at least me, to kind of get going. I kind of knew this is my shot to maybe go at this win. Just kind of buckled down. I got some good laps going. Was able to catch him.

Honestly, I kind of saw him making those mistakes in the whoops and I kind of knew that was going to be my spot. He found the line that I had kind of felt comfortable with and sort of taken it. So I had to kind of search around and would make a run, but it was kind of like Malcolm on me. You could make a run, but never quite close enough to make the pass. It was definitely a track that was very tight and tough to pass. I felt like if it was a do or die situation I maybe could have gotten aggressive, but overall it was an awesome race. We battled hard to the very end. It’s pretty spectacular for KTM to go one and two, and for Marv to get a win after a long time.

Is it a sigh of relief for you to be closer to the championship now, in the 20 points? Or is it more stress because you have to wait another week?

That’s all good. I think honestly I kind of moved past that. At Atlanta, I was pretty in my head about it but now I know on any night that I can be up there and in the mix and be in the fight. So I think now it’s obviously a sigh of relief. The more the better, absolutely. But I feel like lately I’ve just been honestly racing to go for wins. I think that I would love nothing more to go out that last one and have that same mindset.