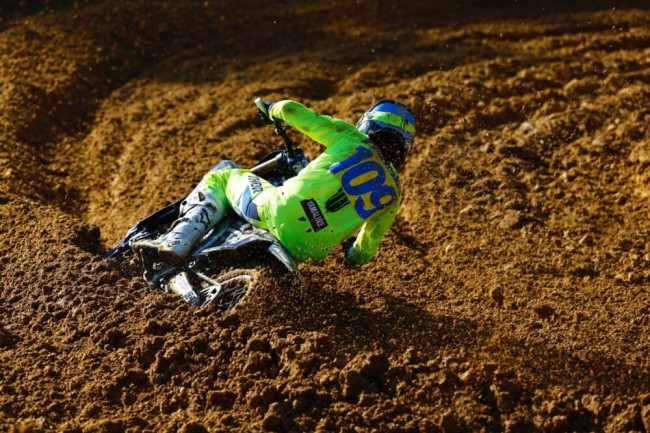 Cooper came into Budds Creek with increased confidence after earning a spot as the MX2 rider for the U.S. Motocross of Nations team. Although Cooper had been off the bike most of the week while feeling under the weather, he started the day as the second-place qualifier. That translated to a solid top-five start in Moto 1, but unfortunately, the New Yorker ended up going down with another rider on the opening lap. He had to fight his way back from 33rd and picked off riders to finish the 17-lap race in ninth. Cooper nailed the start in Moto 2, claiming a season-leading seventh holeshot. He held off pressure for the first five laps before relenting the lead. It was a hard-fought moto, but with depleted energy from pressing through in Moto 1, Cooper claimed fourth at the checkered for fifth overall.

With injuries keeping him from this race in 2021, Thrasher made his first-ever trip to Budds Creek and utilized the qualifying sessions to get comfortable on the track. He qualified ninth and put himself in a good position at the start, ultimately grabbing one of his best starts of the season in fifth. Thrasher was staying with the front group but had a crash on the second lap that pushed him down the charts to 11th. With most of the race ahead of him he put his head down and picked off several riders, ending the moto seventh. The second moto was better for Thrasher, who started eighth and kept it consistent to finish the race in sixth for sixth overall.

Farres got the call this week to race with the team and with just a little time on the bike, the Spaniard got going at Budds Creek with a 10th-place qualifying position. He quickly put the rest of the field on notice after starting ninth and ran in the top five just a few laps later. Riding well, he was able to build a gap and earned an impressive sixth-place finish to start the day. Farres grabbed a 10th-place start in the second moto and started to make moves forward, but had a tip-over that pushed him back to 13th where he ended up finishing to give him ninth overall.

The Monster Energy Yamaha Star Racing team heads to Ironman Raceway for the penultimate round of the Lucas Oil Pro Motocross Championship just outside Indianapolis, Indiana, on Saturday, August 27.

Jensen Hendler
Monster Energy Yamaha Star Racing 250 Team Manager
“It was a good day overall at Budds Creek. Justin put in a great ride after being off of the bike this week and not feeling well. Nate made it tough on himself with a mistake in that first moto, but he fought back and had a solid day. It’s another new track for him and he continues to make progress, which we’re happy with. We’re also happy with Guillem. Everything is new for him – a new championship, new track, new team, new bike – and he had a great first ride and finished in the top 10.”

Justin Cooper
Monster Energy Yamaha Star Racing
“It was a pretty good day for what it was. I haven’t been able to ride all week because I’ve been feeling sick. I made the decision late in the week to race; I wasn’t sure if I would be able to try it. So considering all of that the day went pretty well. I had the crash in the first moto that sent me back to basically last, but other than that we pushed through the day. In the second moto, I didn’t have much energy and I think that showed. Hopefully, I can regain that over the next week and bring something more to Ironman.”

Nate Thrasher
Monster Energy Yamaha Star Racing
“Budds Creek was a fun day for me. It was another new track, but we had a solid day and took a step in the right direction. I’m going to keep a positive attitude and look to keep building next weekend at Ironman!”

Guillem Farres
Monster Energy Yamaha Star Racing
“It was a new experience for me, never racing in the U.S. before. The first thing I noticed that was different from Europe was the schedule, but we were able to have a good practice and was 10th in the combined times. In the first moto, I had a really bad start, but I made up a lot of positions on the first lap. I ended up making some passes and finished sixth, so I’m really happy about that. The second moto I had a little better start and was about 10th, but had a little crash and dropped down to 13th. Overall, it was a good weekend for my first time in America and I’m really happy with the bike and my team.”