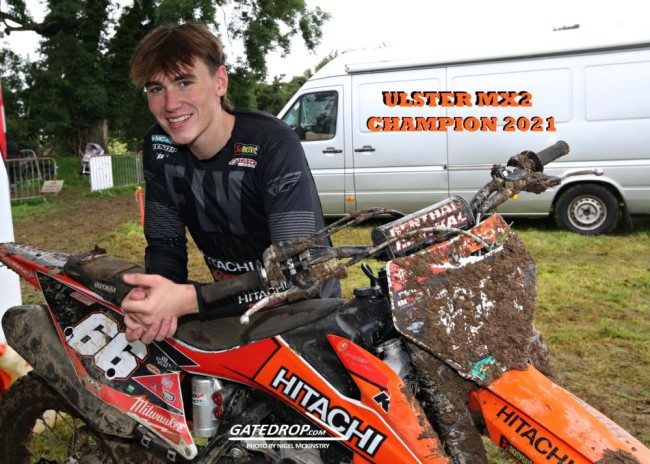 Ulster MX2 Champion, Conor Mullan has travelled to France this weekend to make his EMX250 championship debut. With the Ulster and British Championships over for the year, instead of ending his season, Mullan has decided to get his feet wet and compete at European level.

“The reason I decided to try an EMX250 round is that I have missed a lot of racing this year due to injuries, so I didn’t get a chance to compete in the British Championship this year. Therefore I spoke to Roger Magee and he was willing to help me get to the event with his team. I decided to do the French round because I enjoy the hard-pack conditions, and like the tracks in France”, Mullan told GateDrop.com.

“I’m feeling good going into the weekend. I was able to do a good few days of riding and testing with the Hitachi KTM fuelled by Milwaukee team. They have been a big help to me going into this event. For this weekend I have no expectations at all. I just want to go and enjoy the experience of being in the GP paddock. I think it will benefit me riding with the best in Europe”, added Mullan.

Not only is Mullan contesting the French round of the EMX250 series but he’s hoping to also contest the rest of the series which will also head to Arco di Trento and Mantova.

“I’m hoping to do all of the remaining rounds of EMX250. It would be a great experience for me, and hopefully it will improve my riding. Firstly I would like to thank Roger Magee and all the Hitachi KTM fuelled by Milwaukee team for giving me the chance to compete at this level. Also, thanks to my Mum, Dad and all of my personal sponsors;
Belfast Ship Stores, Function Design, Cosy Roof, BLRC, Seaford Scrap Metal, Quinn’s, Ballynahinch Motor Factors, Prep House, Mcgrady Insurance, Traction Finance and MB14″, concluded Mullan.

It will be nice to see an Irish rider in the GP paddock this weekend so we would like to wish Mullan all the best!