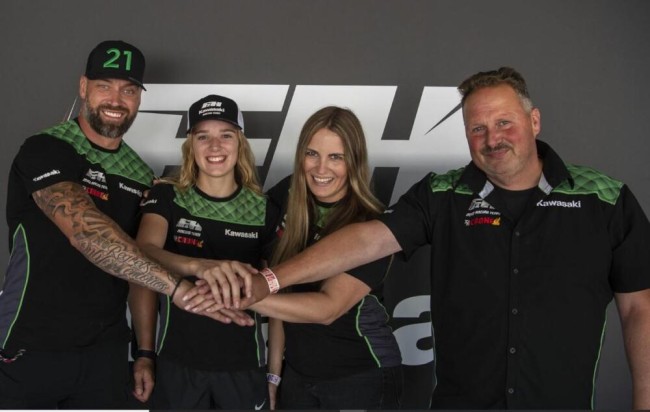 For the first time in its young history the F&H Kawasaki Racing Team will include a girl in the team line-up next season as talented Lotte van Drunen joins the Dutch squad for the next three years.

The first girl to have ever been on the final podium of the 85cc European Motocross Championship last year, Lotte Van Drunen just turned fifteen years of age this week so she will be able to contest the final round of the FIM WMX Women’s World Motocross Championship in Turkey. Few girls have been so successful in open competition, and Lotte qualified amongst the boys at several rounds of the 125cc European Championship this season with a top-ten result at Lommel as the highlight of her season. Lotte, who has already been working alongside F&H trainer Marc de Reuver in recent weeks, will join the F&H Kawasaki squad later this year to prepare for her first full season in the Women World Championship in 2023.

Nathalie Fasé (F&H team manager): “We are very happy and excited to add a girl to our team and to compete with such a great talent in the Women’s World Championship in the upcoming three years. We are looking forward to a successful collaboration and many successes together! “

Lotte van Drunen: “I am very proud to sign a three-year contract with F&H. This is an amazing offer for a girl of my age and I’m really grateful for the opportunities that they will give me! I’m already looking forward to starting with the team and training on my Kawasaki during the winter.”