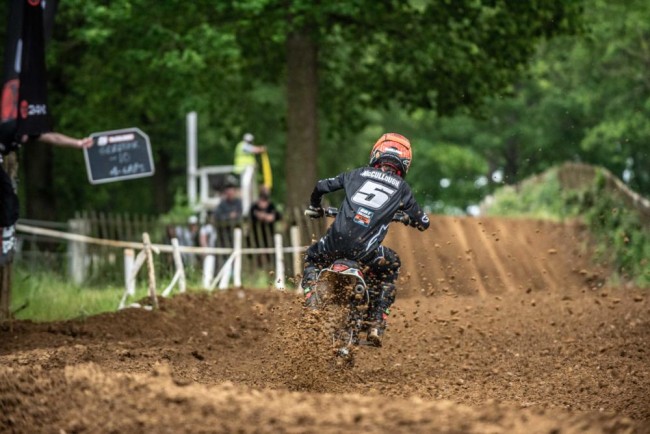 It was a sticky start at Canada Heights for Round 3 of the REVO ACU British Motocross Championship this weekend. The picturesque Kent circuit had seen a lot of rain on the Friday prior to the event, meaning that although tough going for practice and qualifying, the track would be perfect throughout the day – despite the blistering heat and sunshine.

Ollie Colmer continues to go from strength to strength in the 125cc class, with a superb pole position in Qualifying, even beating all of the 250cc bikes in the combined group. A strong 2nd place in the first moto was followed by a very convincing win in the 2nd leg, giving him the overall win and extending his championship points lead further. Ollie remains in the lead of 2 out of the 3 UK National series, with 2nd place in the other.

Cole McCullough was looking forward to getting to grips with the track at Canada Heights, and a 4th place in qualifying was a good start to the day given he had never ridden at Canada Heights before. Cole collided with another rider and crashed hard in moto 1, managing to bring his badly damaged KTM 85SX home to 12th place. After a good start in moto number 2, a red flag after half race distance whilst in 2nd place meant a P3 after the count back to the previous lap. Cole was 6th overall for weekend and sits P3 in the 85cc Small Wheel British Championship standings.

A first-timer to Canada Heights, Finley Evans made a few mistakes in qualifying for the Big Wheel 85cc class, giving him 11th gate pick for the day and putting him on the back foot for race 1. A 13th place finish was the best he could muster in moto number 1 after 2 crashes, but he came out fighting for moto number 2 and sat in 2nd position from the first until the last lap when he unfortunately stalled the bike, ending up in 4th place with 8th overall for the weekend. Finley sits in 4th position in the Big Wheel 85cc Championship standings.

With a full line up of 40 250cc riders in the MX2 class, Kyle McNicol struggled to find space to put together a qualifying lap, resulting in P31 gate pick and a difficult starting position for moto number 1. Kyle chased hard and pushed all race but struggled to make passes so ending in P27 in the first leg. A better start and some bold passing manoeuvres gave Kyle a much better P23 result in race 2, and 27th overall on the day.

John Giffard, GRT Holeshot KTM Team Manager said ‘It was another positive weekend for the team, beautiful sunny weather and a large crowd signifying another fantastic weekend for British Motocross, the atmosphere at Canada Heights was fantastic. The team results were a little up and down for the lads but overall we are in strong championship positions with over half a season left to go. A special mention for this weekend goes to Ollie Colmer, another dominant performance in the Youth 125cc class.’

The team would like to say a big thankyou to all of our sponsors and supporters, and look forward to seeing everyone at Foxhill near Swindon for REVO MXGB Round 4 on Saturday 19th June.