Cianciarulo – I am capable of doing big things in 2021! 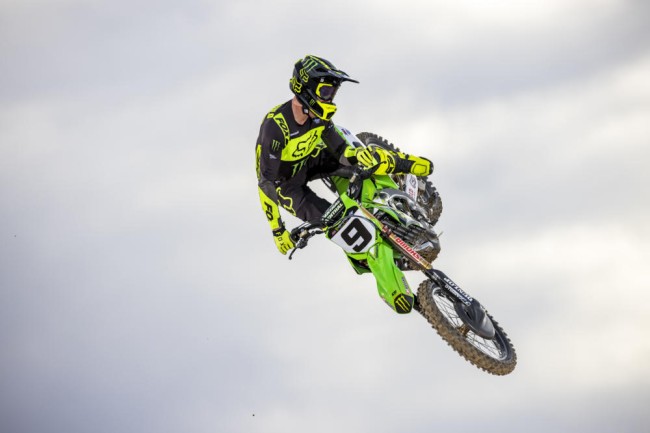 Adam Cianciarulo has revealed he has had a couple of surgeries in the off-season on his wrist and arm to fix a nerve issue – but he is now ready to go and expects “big things” in 2021!

Cianciarulo was a rookie last year but he was the one guy that consistently had the raw speed of Tomac, Roczen and Webb last season and, if he can stay away from the mistakes, could be a huge title threat especially after his form in the outdoors in 2020 but Adam says he is trying to stay in the moment and not get too far ahead of himself.

“I think you can’t think too far into the future you have to stay present minded,” explained the Monster Energy Kawasaki rider when asked if his goal was to go for a race win first before winning the title. “That was my goal last year in my rookie season (to win a race), of course your goal is always to win the championship. The whole rookie thing, I just wanted to get it out of the way, that way this year could have been a bit more just going after the title.

“I’m going after a race win for sure to try and knock that off the list, get that monkey off my back. I feel like I kind of did get that little bit of pressure off by getting that first 450 win, now that I have got some wins in the outdoor series.”

Cianciarulo then talked about needing surgery on his wrist and how it has hampered his preparation slightly for the new season. “Honestly this off-season for has been kind of getting this wrist thing I had going on last year sorted out. I thought it was a cyst on my wrist and I ended up getting a little surgery in the beginning of the off season, but it kept getting worse and I found that it was actually my ulna nerve in my elbow. So I got a little procedure done just before Christmas and it’s been a lot better since then.

“If you guys remember I mentioned some stuff around San Diego, Oakland time just my hand kind of falling asleep out there. So really, really excited to have that behind, if anybody has ever ridden with something like that you know that it kind of takes the fun out of it a little bit. So been having a lot of fun on my dirt bike the last couple of weeks, I definitely think I am capable of of doing big things in 2021.

“I don’t want to come across like I am underprepared, I don’t feel like I am under prepared, I feel fit and I feel good on the bike, but it was just I wasn’t able to put a lot of weeks together. Last week was the first time where I was able to ride four time which is kind of the usual MO for guys in the off-season, really grinding and putting in the work.

“It was kind of just managing my wrist, sometimes it’s good, sometimes it’s not so good. For example, sometimes the whoops would make it bad so sometimes I would do 20 minute motos and go around the whoops, little adjustments like that. I wasn’t able to put in full weeks and full months but I think there is something to be said for having a kind of mostly a full season under my belt. I have carried that feeling into this year as far as the bike is not new anymore and I feel fit so, yeah, it’s coming around.”

Despite not being at Anaheim, Cianciarulo believes the nerves will still be there behind the kind but it might be a bit calmer outside that. “I don’t think the location will play to much of a role. it is still the same type of nerves lining up at Anaheim, maybe a little bit less just because the crowd won’t be at full capacity, the Anaheim one hype, right now we are doing this press conference on zoom, normally it’s the whole build up for the race, we are going there on Friday and it’s super packed and crowded, everybody is there doing the press conference. So I think it’s a little bit more of a chiller vibe but when you get behind the gate and you look to your right, look to your left and see all these amazing athletes next to you it’s still nerve wrecking after you. For me I really like the California races so I hope we can get back to tat to that pretty soon but at the same time I enjoy Houston so excited to get there it’s my favorite football team as well, the Houston Texans – so excited to channel some Deshaun Watson energy!

And fan favorite Cianciarulo admits he is looking forward to having fans back in the stadium this weekend: “The fans are such a huge part of our sport, it doesn’t feel like a complete supercross event without them there. I didn’t get to race all the Salt Lake city rounds but going from Anaheim and the first few California races of 2020 and being there in Salt lake in the first race then going from that to the outdoor season where there wasn’t many fans out there as well, it’s very welcomed from all the racers to have some fans back in the stands. I don’t like hearing these guys next to me when we are on the starting gate, I don’t like hearing them talk! I like to hear the music going and fans talking, someone screaming into the microphone and T-Shirt cannons!”

If anyone is going to win the title outside the big three of Tomac, Roczen and Webb, Cianciarulo is probably the favorite to do so and that makes his relationship with teammate Tomac, the defending champion, potentially fascinating as the season wears on and if they become title rivals going into the final few rounds!