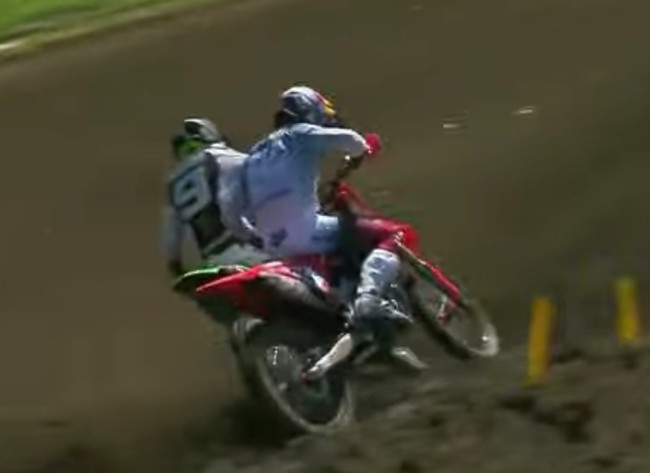 Adam Cianciarulo put a very aggressive move on his close friend but on-track rival, Ken Roczen, in the opening Moto at Colorado on Saturday – but Roczen was okay with it and both riders say racing hard on the track doesn’t affect their friendship.

This is what they had to say in the press conference about the move:

Your friend] Adam [Cianciarulo] put a pretty aggressive pass on you for the lead. Ken, were you okay with that? He came by on the inside right after the start.

Roczen: I heard somewhere that somebody said, “This is for sure going to affect their relationship.” Before moto two I came up to him and I’m like, “Hey, I think that’s what they said,” but not bit did it faze me at all. It just doesn’t. I honestly want Adam to do good. He’s been through some injuries as well. We race each other hard on the track and it was fine. I had zero problems with it.

Adam did you just see an opening and go for it? Did it matter who it was that you were passing for the lead there?
Cianciarulo: No. Not in the heat of the moment like that. I’m not reading jersey numbers out there. I’m just trying to get to the front and do my job. I was hoping when I showed a wheel on the inside that he was just going to brake, but he kind of took it all the way to the end of the corner. Obviously, it was an aggressive move, but he got me back a couple of laps later so it’s all good.

Roczen: First off, I left the door open. You can’t see anybody, so if he puts his front wheel in there, I’m kind of just committed to the turn. It’s a weird angle thing right there and how the turn sweeps, so it definitely makes for some collision without wanting to.

See the aggressive pass at 1m 15 sec below:

Roczen, who now leads the championship by a point over Ferrandis after his blistering 1-1 performance at Colorado, also dismissed allegations he was playing possum in the lead up to the outdoor series saying he genuinely was struggling: “I think it was [Kris] Keefer or something that put it out there. I read it and I can see how it looks like that from the outside, but I promise you guys I was not. Honestly, you can probably ask all the other riders maybe even on here and some of the teams. [Preseason] It was a bit of a struggle. I was not playing possum. Just to clear the air.”