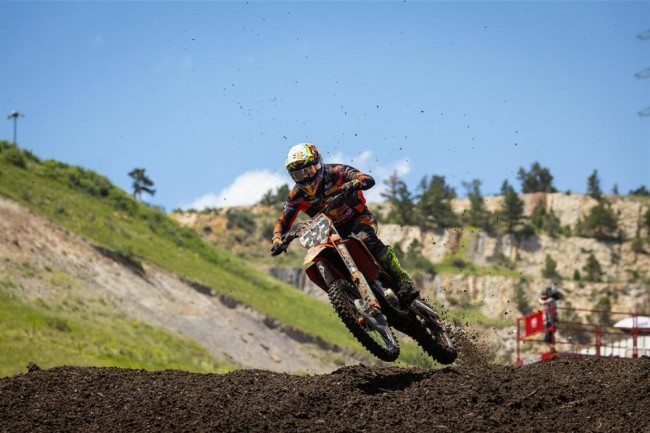 Red Bull KTM Factory Racing’s Antonio Cairoli continues to race his way toward his first 450MX podium, capturing his best moto finishes of the season – with fourth and fifth – to secure fifth overall at Round 3. Teammate Ryan Dungey followed suit in sixth overall, claiming a pair of consistent 7-7 finishes at the Thunder Valley National.

The nine-time world champion continues to progress throughout the season with his best performance yet, only three rounds into the series. Claiming the holeshot in Moto 1, Cairoli held off a hard-charging Ken Roczen early in the race. He stayed in the top-five battle for the first half of racing before settling in for a sixth-place finish. In the second moto, Cairoli grabbed another solid holeshot and raced up front once again early on. Adhering to a strong fourth, he battled just outside podium contention all race long to finish just shy of his first podium in the U.S. series.

Antonio Cairoli: “I’m really happy about the race. Of course, I know that with my conditioning, all those guys in front are prepared for racing and winning the championship, and last moment only a month ago, I started to really work out to be here and it’s not enough. I felt today, I was a little bit worse off with the altitude. We have already a big improvement from the first round so I think we are in a good way and let’s move on from here and let’s see on the week and next week.”

For Dungey, consistency was key in Colorado as he powered through tough conditions for another great showing in the premier class. With a seventh-place start in the first moto, Dungey maintained a good pace just outside the front-runners and he carried it through the checkers for a strong seventh. With a top-10 start in the second moto, the three-time champ quickly climbed through the field and into the top-five battle but ultimately got shuffled back for a seventh-place finish in the moto and sixth overall at Round 3.

Ryan Dungey: “Today, I was pretty happy. In the first moto, I got a decent start and the pack didn’t just break away – we were all kind of right there for the first 15-20 minutes and that was encouraging. Even at the end of the race, the gap is shrinking. Second moto, I didn’t get the greatest of starts and I was trying to come through the pack. I got up to McElrath for fifth and I just got stuck at his pace and those guys got away. Two good solid motos, I just had to dig really deep but all-in-all, a positive day.”

It was a tough battle all day for Aaron Plessinger, who came through the pack after experiencing crashes in both motos. The Ohio native put forth a hard-charging effort, despite posting 11-12 scores for 11th overall.

Aaron Plessinger: “I didn’t have the best day. I struggled in practice but going out for the motos, I felt pretty good. I made some good passes and came back but struggled with keeping it on two wheels. Overall, I’m kind of bummed about the way I rode but we’re good and we are ready to go for High Point and hopefully we can get the bike a little bit better this week and go from there.”

Coming off a best finish of fifth overall last round, Max Vohland was feeling positive at the start of Moto 1 but unfortunately experienced a mechanical issue at the start of the race and was unable to finish. In Moto 2, Vohland came back strong with a top-10 start and he battled up to eighth late in the race. Salvaging eighth in the second moto, Vohland was able to score some championship points and 15th overall on the day.

Max Vohland: “It wasn’t a terrible day. A little unfortunate in the first moto – in the second corner, the bike quit out on me and I had a little bit of a mechanical failure. It sucks to miss a moto and lose some points but I got a good start from the outside in Moto 2 and worked my way up to eighth. I tried hard. I could have ridden a little better in the second moto but it was still good enough for eighth and I’m still sitting ninth in points.”

The 2022 AMA Pro Motocross Championship heads to Mt. Morris, Pennsylvania next Saturday, June 18, for the Round 4 of the series.