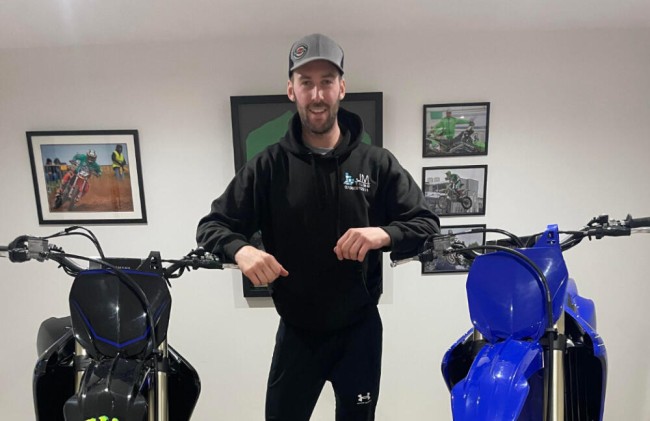 The Arenacross UK series will be back in early 2023 and we can reveal that an Irish team will contest all six rounds of the series. The man behind the project is Cailum Meara who got the call to help Team Ireland at the RedBud MXoN last year and has now decided to start up his own team for the Arenacross UK series.

The team will known as Team All Moto Megabikes Yamaha powered by Start Solar and run Yamaha machinery. Two Irish riders will also race for the team – Jason Meara and James Mackrel with both going up against the best British riders in the pro class.

Meara has Arenacross experience from the past being a front runner in the rookies class battling with the likes of Dylan Woodcock and Yannis Irsuti. Mackrel hasn’t quite got the indoor experience Meara has but will enjoy a new experience and improve as he adapts to that type of racing.

The series gets underway in Belfast for the opening two rounds when the team will make their debut before heading to Aberdeen, Birmingham and London to complete the full series.

James Mackel: “It is brilliant to have the Arenacross UK series back and I’m excited to get started. It’s great that it will be a British Championship but being indoors will be different, it is always a great experience. I can’t wait to get started with everyone coming into this series, it will all be a new experience getting to do the full series and not just one event, I’m sure building up to it me and Jason will push each other on to get the best results so excited and ready to get going. I don’t have many expectations, I would like to finish with a good end result and good race results”.

Jason Meara: “I think Arenacross UK is great for the youth, personally growing up we never had the platform to get into supercross style racing so I think it’s a huge step forward to make some Irish/British supercross stars for the future. Fair play to Cailum he’s literally pulled everything together by himself, I’m over the moon to be representing him and he’s give us everything we need. My goal is to go and enjoy it I’ve had some great results in the past in Arenacross but I haven’t raced it in 4-5 years so we’ll see how it goes”.

Cailum Meara (team manager): I saw the Arenacross series was coming back and instantly wanted to get involved. I started making phone calls and here we are a couple of months later – I’ve set up my own team and buzzing to get going. It’s amazing to see Arenacross UK back and especially back here in Belfast, Ireland. I can’t wait to have the support of the home crowd on the Teams side.

I mean it’s only good for the sport, Motocross is slowly fading away as much as it kills me to say that but it’s just the truth. The future of the sport is turning indoors more and more so having this as on official British Championship only benefits everyone involved. I honestly have no expectations. Jason and James will give it their all and as long as they do that I’m happy. I know both guys very well and know that I’m going to get 100% effort from both so I couldn’t be more excited to get things started.

I can’t thank everyone that came on board to make this possible. It’s a big task to organise everything and run my own team and to do it at 22 years old is a tough ask but I’m ready for the challenge. See everyone in Belfast! Many thanks to all involved in putting this together:  All Moto IE, Megabikes, Start Solar NI, Autobuy, Des Kelly, ADS Mechanical Ltd and Syntol Lubricants”.