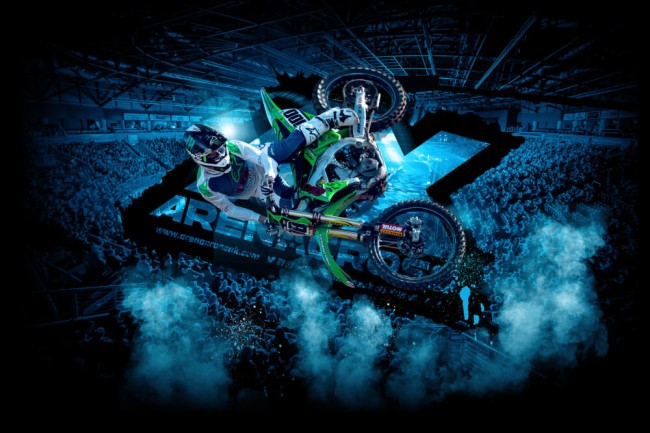 The Arenacross Tour presented by Fix Auto UK is gearing up to welcome packed grids across all classes for its 2023 British Arenacross Championship.

In the new-for-23 Futures class, aimed at nurturing young talent, just 12 riders and four wildcards made the grade, while in the over-subscribed ProAm British Championship – which attracted the greatest interest of all time … 34 contestants, plus wildcards, were selected,

Local riders will line up for the innovative KTM, GASGAS and Husqvarna Motorcycles-backed all-electric AX-E5 Championship at the arenas in Belfast, Aberdeen and Birmingham. The final Arenacross round at London will host the first-ever AX-E5 Final with the top four riders from each of the qualifying rounds taking to the start line.

This group will feature the very youngest riders of the entire tour with young Ollie Denvir from Downpatrick, Northern Ireland, Ollie Hain from St Andrews and Oliver Wilson from Solihull representing their hometowns in their local venues. Other than an uncanny similarity in first names … the youngsters are also all a tender six years of age.

The Supemini, Futures and ProAm classes will be boosted with a spot of girl power when Olivia Reynolds, Beanie Reece and Anya Colley get ready to prove themselves against their male counterparts. They’ll be intent on showing them their rear wheels as they tackle the challenging Arenacross circuits. Long-standing Arenacross followers will also notice several familiar names in the rider line-up across these classes as lads such as Austin Beasty, Isaac Ash, Lewis Spratt, Charley Irwin and Josh Greedy move up through the ranks from previous years.

With the confirmation of all classes, the 2023 Arenacross Tour presented by Fix Auto UK is poised to deliver the best-ever Arenacross championship, with race-win-hungry competitors from six-year-old novices right the way through to the ‘best of British’ Pros.