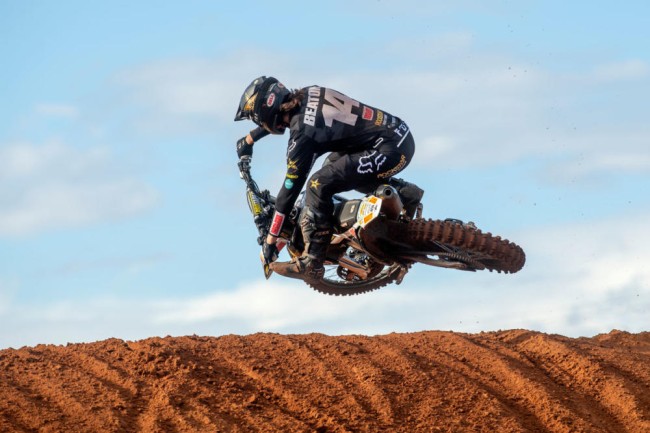 Rockstar Energy Husqvarna MX2’s Jed Beaton knows that 2021 is the time for push to be FIM world champion in what will be his fifth season in the category, his last year before aging-out and as the natural successor to Thomas Kjer Olsen who held the position of team leader for at least three seasons prior to moving to MXGP with Rockstar Energy IceOneHusqvarna this winter.

Beaton finished 4th in the 2020 series with a moto victory and a career total of five podium appearances. It was a consolatory campaign after disruptive injury problems, and helped re-establish Beaton’s status as one of the brighter prospects on the GP scene.

“Last year was a really solid year after a lot of small – and finally a big – injury in 2019,” he assesses. “I built off every round and by the end I was challenging for podiums most of the time. We’ve done quite a bit of riding this off-season. I feel confident. I think it might be possible for me to challenge for overall wins and maybe even the championship.”

“Like I’ve said many times before I don’t expect to travel all the way over here and leave so many things behind just to make up numbers on the track,” he adds. “I have a goal and I want to try and achieve it. It’s also my last year in MX2 so hopefully I can make some good results and have something the year after in 450s as well.”

Aside from injury and the forced absenteeism, one of Beaton’s weaknesses has been race starts on the FC 250 F. He’s struggled to match the holeshot rate or competitiveness of KTM’s Tom Vialle or Yamaha’s Jago Geerts on a regular basis. It has been a focal point of work for the team during the pre-season. “I’ve been trying my best to improve them but it’s completely different in a race situation, so I’m waiting for them [the races] to kick off again,” he says. “I have been doing a lot of things differently with my starts and I want to wait and see how it turns out at the races. Confidence is one thing as well that helps with this aspect and as soon as we can build it up then it will just grow.”