Barcia on his podium, Brown injured 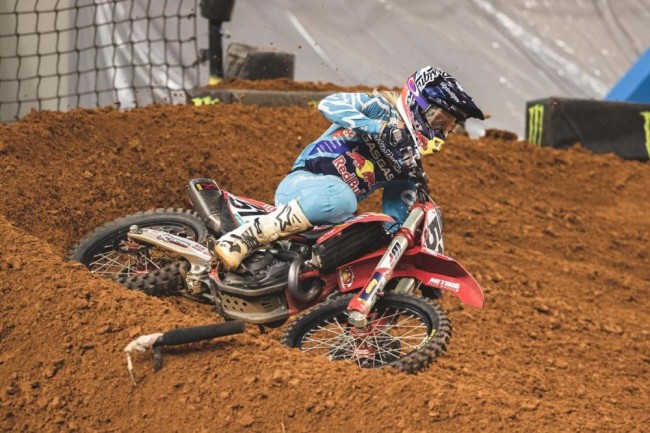 The Troy Lee Designs/Red Bull/GASGAS Factory Racing Team had a positive start to their week-long stay in Arlington, Texas as Justin Barcia scored a second-place podium finish with an epic battle at round 10 of the 2021 AMA Supercross Championship. Teammate Pierce Brown unfortunately had to watch from the sidelines due to a thumb injury he sustained during a crash in Saturday’s free practice.

Barcia worked his way through the qualifying sessions earlier in the day, leaving more to be desired as the gate dropped for the night’s racing. He started just outside the top-five in the heat race, eventually working into podium contention halfway through the race. He locked in third with four laps to go and he brought it home for a top-three finish. In the Main Event, Barcia put himself into a great position off the start, rounding the opening lap in fourth. Mixing it up in the early laps, Barcia eventually settled into the second-place spot where he strived to catch the leader of Cooper Webb, whose pace proved to be unmatched, to ultimately claim a solid runner-up finish.

Barcia: “It was a good week leading up to this, I did a lot of testing and my team did a great job helping me get comfortable and feeling good again. Tonight was very special for us, our boss from Austria was here, so that’s super awesome to get second and make him proud in front of these Texas fans. The track was super challenging and I pushed hard and closed on Cooper a little but I just couldn’t make it happen, he rode really well. I’m looking forward to the next two rounds here, I’m going to push it hard and try to take another win.”

Coming off an impressive podium finish last Saturday at Daytona, Brown had high expectations for his second race of the season. However, a small tip-over during free practice resulted in a fractured thumb and despite a brave attempt at battling through qualifying, Brown and the team made the tough decision to sit out the remainder of the day and re-evaluate the injury on Monday.

Brown:“It’s a bummer because I came into today super confident. I just had a small tip over in free practice and messed up my thumb a little bit. We weren’t sure what was wrong with it so we just kept on trucking through the day but it was bothering me all day so we got an x-ray after the last practice and found out that it was fractured. We’re going to get it reviewed on Monday and hopefully we’ll be back soon.” The Troy Lee Designs/Red Bull/GASGAS Factory Racing team will return to AT&T Stadium on Tuesday for their second round in Arlington, Texas.