Anderson on a tough night in Daytona 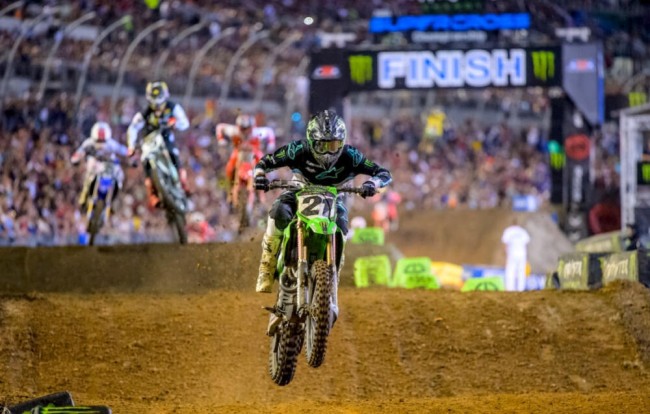 Jason Anderson gives his view on a tough night in Daytona after he got taken down by Malcolm Srewart and then went down again after getting caught up with Dean Wilson, to leave him in ninth (penalised a spot for gaining an off track advantage as a result of being forced beyond the Tuff Blocks while coming through the field) and ending the night 18 points down on Eli Tomac.

Anderson said: “I felt really good today leading into the night show and showed I had the pace to be upfront. The results weren’t there tonight but I know I am way better than what they show and I’m going to keep getting better as the season goes on. I’m never one to give up when things get tough, and I think I showed that tonight. There were some moments where I think being a little more patient on my end would have been the better move, but I did my best in terms of damage control tonight. I have a lot of fight left in me and we’re only 18-points behind, this championship isn’t over yet.”

Podcast! Jonathan McCready and Andy McKinstry talk about the MXGP at Mantova, some amazing MX2 performances plus should Herlings race the US nationals? We also talk about Ken Roczen’s future and that Stewart/ Anderson clash (at 1 hour 5 minutes 20 seconds in). Available on all major podcast platforms, get it on iTunes here or Spotify and You Tube below: