Anderson and Wilson on Atlanta 3 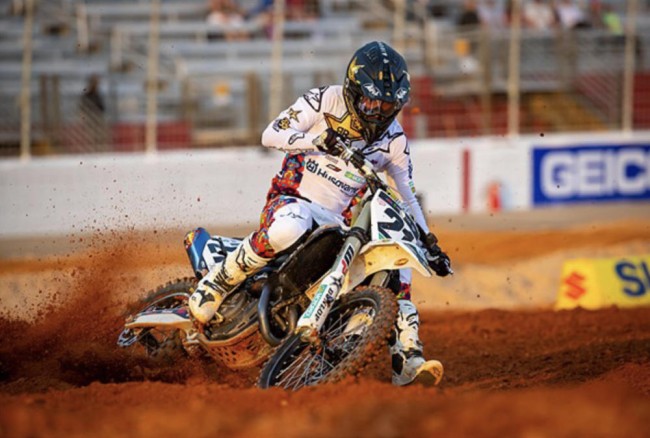 The Rockstar Energy Husqvarna Factory Racing Team concluded its week-long stay in Atlanta Motor Speedway on Saturday with Round 15 of the AMA Supercross World Championship. Jason Anderson picked up where he left off with great momentum in Atlanta, acing pole position and a heat race win, but bad luck in the Main Event saw him finish just outside the top-10 for the night. Teammate Jalek Swoll had a solid performance in the 250SX West division as he battled inside the top-five to come away with a sixth-place finish in the class. With his third-straight pole position, Anderson carried a lot of momentum into the heat races.

In 450SX Heat 2, Anderson grabbed a fourth-place start and he charged his way up to second on the opening lap, closing in on the leader heading into the final laps. He vaulted himself into the lead with two laps to go and raced his way to a nearly two-second victory in the heat race. In the Main Event, Anderson got off to a fourth-place start and mixed it up early on the opening lap before getting tangled with another rider and going down. Re-mounting back in 14th, Anderson immediately put on a charge and ultimately made his way up to an 11th-place finish.

“My day was good all the way up to the Main Event,” Anderson said. “I was P1 in qualifying, won my heat race and in the Main Event I got a good start but someone got into me on the first lap and I ended up getting shuffled back. All-in-all, it was a positive day and I’m just going to work on it next week.”

Dean Wilson had another great qualifying session, coming away with a top-five position heading into the evening’s racing program. In 450SX Heat 2, Wilson started off in eighth and he diligently worked his way into a top-five spot with two laps to go. With a hard-fought climb, Wilson ultimately secured a solid fifth in the heat. In the Main Event, Wilson started off in 12th and he worked his way up to seventh just after the halfway point. While running seventh, Wilson got into a back-and-forth battle that dropped him back to eighth and he maintained that position to ultimately finish eighth.

“My day wasn’t too bad, I ended up with my best finish of the season,” Wilson said. “In the main, I didn’t execute the start like I should have but I made a few passes, got into seventh and Ferrandis got me with five laps to go, so I ended up eighth. It’s not a great finish but it was nice to be in the battle. I’m looking forward to Salt Lake and I’m ready to keep improving.”

250SX West Swoll put himself into a favorable fourth-place position off the start of 250SX Heat 2, where he battled inside the top-five throughout the five-lap race to ultimately finish fifth in the heat. In the Main Event, Swoll powered his way off the line and into third early on lap one. He dropped to fourth on lap three and he fought hard inside the top-five for most of the race. On the final lap, Swoll engaged in a last minute battle to ultimately secure a sixth-place finish.

“It was a mediocre day but it showed flashes,” Swoll said. “I feel good and healthy going into the last round – leaps and bounds better than last season – so I’m just going to keep my head down, get good training in and end the season on a solid note in Salt Lake. I’m ready to keep moving forward and hopefully get that good last race and full send into outdoors.”

Stilez Robertson lined up on Saturday after missing out Tuesday’s racing due to a crash in practice. He got off to a top-five start in 250SX Heat 1, where he battled his way up to a podium position heading into the final two laps of racing. He held strong to secure a third-place transfer. In the Main Event, Robertson went down on the opening lap and wasn’t able to race.

“The Main Event was chaos in the first the couple of turns,” Robertson said. “I got into the whoops and just missed my mark, went down and felt my knee pop. I tried to give it a go again and I just didn’t feel strong or stable, so I went to the medical unit and they said I dislocated my fibial head, so hopefully we’ll be back soon.”