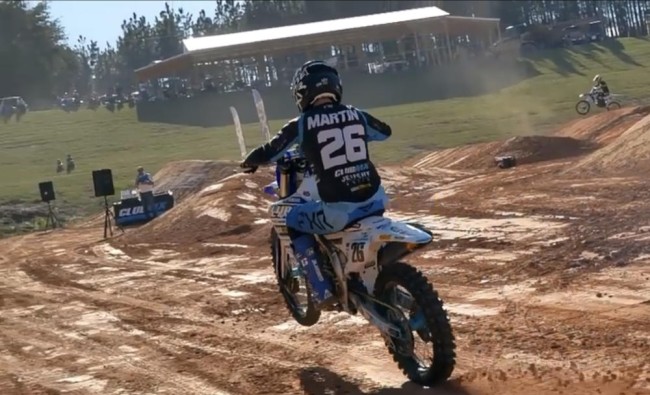 Alex Martin has a career that most people only dream about in the sport of motocross. The one thing that was missing on his resume was the chance to compete in the premier 450 class and with the help of the Muc-Off/FXR/ClubMX team, he is crossing that off his bucket list now.

His 250 career is what he is best known for. Martin currently holds the record for the most motos completed [272]. Ahead of names like: Brown, Ramsey, Lamson, Antunez and many other great racers. Martin’s accomplishment will likely never be surpassed. It is very representative of the hard work and consistency throughout his career.

His other notable accomplishments are extensive:

And in 2022 he added one more special award:

There is more in store for Martin as he will transition from racing after the last round in September to a variety of options he has inside the industry and out. He has been racing nearly his entire life then turned pro at the beginning of the 2008 season and has never looked back.

“I have decided to stop racing full-time at the professional level at the end of the 2022 season. This is the 14th year of my career and I’ve been grinding for a long time. My wife and I have had some long conversations, and we both felt this is a great time to move on to some new opportunities in life. I’m proud of the things I have accomplished in this sport, the great teams I have been a part of, and the incredible people I’ve met along the way. I’m grateful to Brandon Haas and the entire ClubMX crew for the opportunity to race the 450 full-time this season. It has been an absolute blast being a part of their program. I’m looking forward to what the next chapter will bring!”

Martin is not just going through the motions to get to the end of the season. The intensity in his training is at an all-time high so he can finish out the series with some top ten finishes in the very competitive 450 class. His best chance to accomplish this goal will be at one of the east coast rounds, especially his home track in Millville, MN. Even with his success in the Monster Energy Supercross series, Martin is considered an outdoor specialist, which is to say we haven’t seen his best yet.

From team owner Brandon Hass perspective: “I have known Alex for a very long time, and he is one of the best racers I have ever worked with. He loves the sport and has always been willing to put in the work to be successful. There was a lingering question as the whether he would continue for another season, so we planned to keep him in the program. When he told me he didn’t want to race any longer, I was disappointed but also very happy for him and his wife. He has earned the right to go out on his own terms and be able to look back at a great career. That’s not to say it’s the end of our working relationship. Alex not only put in the work, but he is also a student of the sport. He studies and analyzes everything from riding techniques to fitness and nutrition – which are the keys to his success. His passion for the sport is contagious and that is why Alex will always have a place with ClubMX in some capacity if he wants one. He is a great ambassador for the sport, and we have been discussing some different options when he transitions off the bike. I personally want to thank Alex for all he has done for me and ClubMX, he is a key part of our success.”