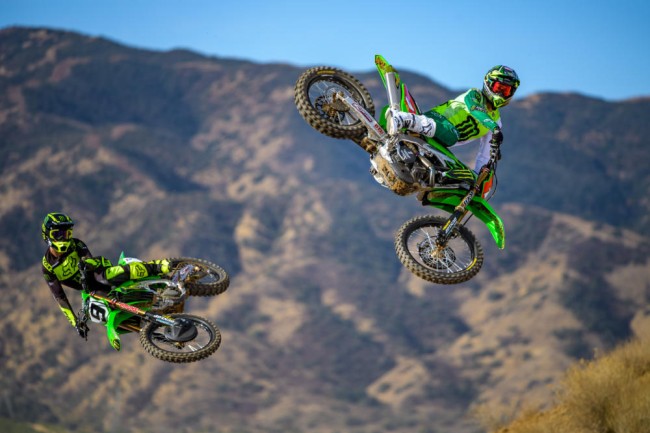 It’s finally time for supercross! When you you look down the list of 450 riders in 2021, it really hits home just how deep the class is and how many potential winners there are in a season that is already very different with the three races in a week format. Art the first few rounds when everyone is confident and convinced this is their year, it could be carnage as they all seek to get the momentum going to justify their winter’s training.

Eli Tomac comes in as the defending champion and feels he will have less pressure than last year because he has already won it. But with his own teammate breathing down his neck, Adam Cianciarulo, who beat Eli outdoors, that pressure to be number one within the team never mind in the series might start cranking up quickly! Eli has successfully defended his outdoor titles before but with supercross most American’s specialty, this could be his hardest championship to defend, as this is title every rider on the gate wants the most.

Cianciarulo is the man who can win it all this season outside the big three of Roczen, Webb and Tomac. Adam has all the speed he needs but just needs to cut out the mistakes that saw him being carted off in his rookie season, if he does that he should be a big threat for the title.

Cooper Webb is always there, even on his bad nights and his abilty to win under big pressure to deliver tooo means Webb could well be the favourite for the title if you look beyond Tomac. He just never gives in, gets great starts and wants to get the number one plate back!

Ken Roczen on pure riding talent is the number one guy for sure but his health issues are still the question mark as are staying away from injury. If he can avoid both, which he has struggled to do in his entire 450 supercross career then he will be knocking on the door. Justin Brayton described Ken Roczen’s speed as “incredible” this week so the pre-injury 2017 Roczen might just be back and that means everyone else should be worried!

Jason Anderson and Zach Osborne have different styles on and off the bike but both are more than capable of getting in the mix. You feel Osborne needs it more than Anderson who has already won the prestigious supercross title but Zach has already had a big crash on press day which hopefully hasn’t taken the wind out the 450 National champions sails! He wants this supercross title badly and knows he’s only get a small window left to deliver it.

Justin Barcia is one of the most exciting and intriguing questions coming into the 2021 season. He won the opener last year on his way to a strong fifth over in the championship but he looks brilliant on the Gas Gas and is brimming with confidence saying he can do things on the new machine he couldn’t on the Yamaha and that the Gas Gas is more consistent on different tracks. If we are ever going to see Barcia truly contend for the supercross title this could be the year.

The hype was big on Dylan Ferrandis coming into 2021 – until he broke his hand in December! I believe the Frenchman could immediately have had the speed to run at the front but that month off might just delay his ability to be a podium contender. However Ferrandis once he is dialled in should be very fast but like Cianciarulo was last year, might have the odd big get-off in his first season on big bikes.

Chase Sexton tends not to ride over his head but James Stewart is pushing him to ride closer to the edge! The hard-working factory Honda ride has bags of potential and he things he can win races this year, time will tell but expect Sexton to strong this season but maybe not have the elite speed consistently.

Added to those guys you have Malcolm Stewart on a factory Yamaha, Aaron Plessinger saying he finally feels comfortable on the factory Yamaha now Star are running the team, believing he will, ‘wake people up,’ with his speed. Justin Bogle and Joey Savatgy on the Rocky Mountain ATV KTM, HEP Twisted Tea Suzuki’s Max Anstie once he is fit again plus rookie Brandon Hartranft, fellow rookie Shane McElrath, Broc Tickle and Dean Wilson – that’s 18 legit riders without even mentioning Vince Friese, Benny Bloss and Justin Brayton!

To get inside the top ten will be some achievement when everyone is healthy, 2021 has the potential to be one of the best series in history – if everyone stays healthy!

Jonathan McCready: This is always impossible to do! I think Justin Barcia will come out firing again as will Adam Cianciarulo and Ken Roczen in Houston as all three will want to lay down a marker for the year. Cianciarulo wants to win early to get that pressure out of the way so he can chase his main goal – the title, the Kawasaki rider might just will himself to victory tonight with his raw speed and desire despite missing some off-season time with his ulnar nerve issues.

But for the title I think Webb’s consistency might edge him the win over Tomac and AC! With Ken Roczen’s health question mark, that is the only reason I don’t have him top three, if he’s healthy and on form I won’t be surprised to see him take the title!

Andy McKinstry: Predictions this year are incredibly difficult to make, it’s been a long time since an AMA Supercross season has been so wide open. I do predict a lot of winners throughout the course of the season which means consistency will be important – maybe more so than in recent years.

For the first round, I feel like Adam Cianciarulo and Justin Barcia could do damage. As the saying goes, you can’t win the championship at the first round, but you can certainly lose it, so I expect the likes of Roczen and Tomac to be content with a top five. I don’t think they’ll push above their limit just to win the opening round; they will look at the bigger picture which is the championship. Having said that, if they get the holeshot of course they’ll go for the win!

When it comes to the championship chase, honestly, it’s tough! I feel like Webb’s consistency means he won’t be far away at the end of the season, but I’ve decided to make Eli Tomac my slight favourite. When Tomac is on his A game he’s the one rider capable of winning quite comfortably and after winning the title last year he’s under less pressure, he even admitted himself in the past he wasn’t sure if he’d ever get the job done – anything he achieves now is just a bonus. The one thing that could get interesting is Cianciarulo, that’s one rider Tomac won’t want to beat him on a weekly basis. Rule number one is beat your teammate!

Stephen Megarry (Gatedrop test rider): Barcia will get it done at H1, Stamp It! He looks extremely comfy on the Gas Gas, he is clearly having a lot of fun with the new team and has had a super solid offseason. From watching press day Bam Bam is already getting aggressive, he had a brief run in with Cianciarulo, he was doing a quad that i didn’t see any other riders attempt and he even pulled in behind Tomac for a bit to get in his head. Cooper Webb didn’t shine at press day but he’s a racer and will show up for H1 and land in second. Tomac will start mellow to avoid the big mistakes that have haunted him in the past, then show his true speed to grind out a podium in third.

Paul McCready These three guys have always been good at the early rounds, Ken not so much after his injury but last year he seemed to get his confidence and aggression back so I look to him to come out swinging. Hard to leave Tomac off the podium but he just hasn’t had that many good A1’s in the past including last year. With an incredibly stacked field any mistake will see these guys struggling to get into the top five.

For the title however, it’s hard to look past Tomac and Webb who have already done it. Webb just lives for the battle,  I dont see anyone more determined. He is a terrier that enjoys the heads games, the gritty bar banging racing and has race craft like no one else in the field. I’m picking Webb to get that number one plate back.

How to watch outside the USA:

For the fifth consecutive season, Supercross Video Pass will offer fans live and on-demand access to all 17 rounds of the 3-hour Monster Energy Supercross broadcast.

Also, for the 3rd consecutive season, Race Day Live & Qualifying coverage from all 17 rounds will be exclusively available on Supercross Video Pass.

Supercross Video Pass Season subscribers can enjoy all of this live action plus get over 600+hours of archived Monster Energy Supercross races from j2010 to 2020.

The Supercross Video Pass App, available for free on IOS (Apple Store/AppleTV Store), Android (Google Play Store) & Amazon Fire can bring viewing to your big screen or allow you to view every round, on the go!

Supercross Video Pass is exclusive to subscribers that live outside of the United States.

Price for the Full Season Pass is $129.99 (USD). To purchase the 2020 Season Pass:  www.supercrosslive.tv/viewplans