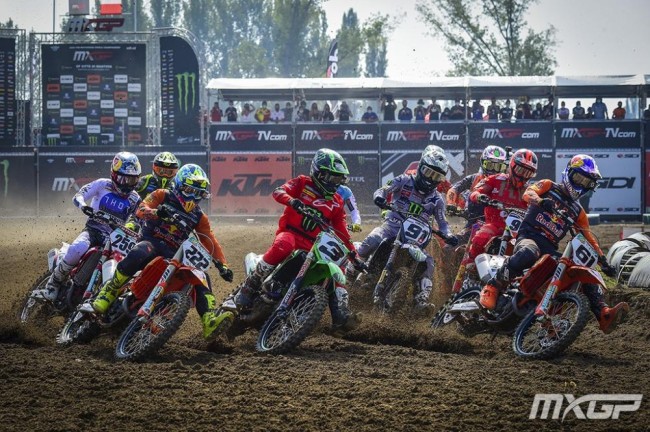 Jonathan McCready: With all the big 450 hitters healthy going into the season it really is tough to call, the class is unbelievably stacked with over 20 outstanding riders in the class just getting points is big achievement. But regarding title contenders it’s a mouthwatering prospect. Jeffrey Herlings is back, Tim Gajser looks incredible on the Honda, Cairoli is back and Prado has a year under his belt – and he was already winning at the end of last season! Then you add in an on-form Romain Febvre and the consistency of Seewer plus the potential of Coldenhoff and that’s already seven names that will be expecting to win races and be in title contention!

For me it is still hard to look past Herlings as I still believe that he is the fastest man on the planet when he is fully healthy, but he has to stay fit and Prado and Gajser, if they get out of the gate ahead of Herlings, could have the raw pace to really push the Dutch rider to the maximum this year. I expect Cairoli to be there or thereabouts again as well as Febvre but I think it will be Herlings, Gajser and Prado fighting it out for the title this year going down the stretch.

In MX2 I just can’t see past Tom Vialle, he is just a brilliant, brilliant rider who ticks every box you need to be a world champion in this sport. Of course defending a title will bring a different pressure he hasn’t had yet but with Geerts already coming in hurt and the Frenchman excelling on hard-pack, any chance Geerts had of stealing momentum early might already have disappeared which is bit of a shame. I feel Geerts has the talent level to match Vialle but mentally Vialle is stronger.

I expect Maxime Renaux to be a challenger as well along with Roan Van de Moosdijk and my dark horse to get amongst those positions is Kemea Yamaha’s MX2 rookie, Thibault Benistant, this kid could turn out to be pretty special. Another guy to keep an eye on is Kay de Wolf, if he gets the starts he could illuminate the series as the next generational talent and the Dutch superstar.

Andy McKinstry: It’s very exciting times as the 2021 MXGP World series gets underway this weekend and what a series it’s setup to be. I have to say since Jeffrey Herlings moved up to MXGP I’ve always backed him to win the title at the start of the championship but this year just feels different. Don’t get me wrong, Herlings is incredible and will probably be the fastest man if he can stay fit over the full season but two words: Jorge Prado.

As far as I’m concerned Prado is coming into this season under the radar by many but I feel it won’t be too long until he reminds everyone just how good and fast he is. The reason I am mainly backing him for the title is his starts, in terms of raw speed Herlings will probably edge him but the Spaniard is the best starter in the world and maybe even ever! It’s going to make Herlings job incredibly difficult and if he does win the world title this year it’ll be his biggest challenge yet.

Of course, we can’t forget about Tim Gajser having won two titles on the bounce, what a rider he is! The Slovenian is also generally a good starter so should be right there from the front plus his hard pack riding is as good as anyone. The way Gajser improved in the sand last year also makes him very dangerous but three titles in a row? I’m going to say it’s just to much of an ask for but you just never know!

If you’ve had asked me to predict MX2 before the French Elite opener last weekend I’d have 100% said Jago Geerts for the title. However, watching that race was like a flash back to 2020 all over again. Vialle’s starts are so good, his sprint speed at the start of a moto is impressive and he’s great under pressure – he’s going to be incredibly hard to beat.

Last year was the Vialle V Geerts show but I do feel other guys will have done their homework over winter and will be closer this year. The Factory Yamaha team is impressive and I feel Maxime Renaux is very under-rated, he can honestly challenge for the title I feel but he’s going to need to be right with Vialle from the opening lap of each moto. Thibault Benistant is going to be fast but I feel he’ll have some rookie mistakes which is totally fine for his first year in the class.