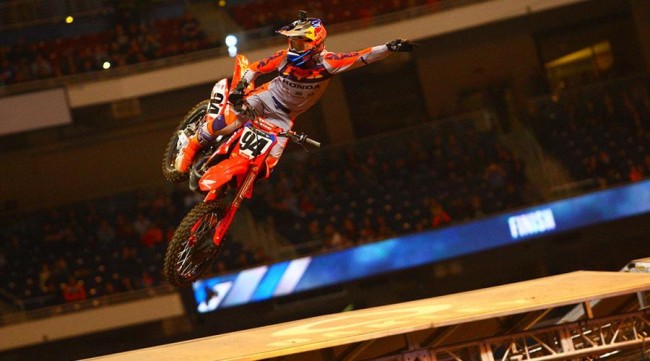 It has been a long time coming but Ken Roczen finally got that main event win he has been chasing ever since that horrific crash in January 2017 that threatened to end his career.

It was testament to the mental strength, courage and bravey of Roczen, as well as his incredible natural talent on a bike, that he even got back to the races. Never-mind figuring out a way to still be up front despite not being able to recover full movement in his elbow that forced him to adapt his riding to compensate.

On Saturday night at St. Louis, Roczen showed a level of riding as close to the level he had pre-injury since his comeback. Smooth as silk with incredible momentrm aligned with precision, Roczen used his impeccable technique and balance as he pulled away out front to win one of the biggest races of his career. The German was finally back where he always knew he belonged, winning 450 supercross races.

“I felt pretty good and made a move pretty quick on Zach,” commented Roczen after the race. “My bike felt good this weekend, we got that a lot more dialled, we were tinkering around with it throughout practice and whatnot and left it the same since the heat race, I rode good in the heat race and I think that paid off. The time was on the tower was right ater the finish line so you can always get a glance on it which was terrible because it made the race feel super long! We were in a good position though and I’ve messed it up in the past towards the end, I was just charging, I had pretty solid speed throughout the whole race, so it was fun.

“I really took it all in, but at the same time, you see like 3 minutes 50 something to go but that’s a solid six or seven laps so it doesn’t look like much but it is quite a bit. Towards the end I literally just wanted to get this race over with. The last lap it felt like I was singling almost everything so I just didn’t do anything stupid. It’s still surreal, it’s been a long time, it’s amazing right now.”

On being able to make a quick pass on Osborne in contrast to struggling to make moves at A1 Roczen felt it was down to being more comfortable on the bike. “Last weekend I was not comfortable at all and I was just sticking behind everybody I was a lot more comfortable in the heat race and main event (this week) I knew if I had a clear track, I can’t get stuck behind, I moved him out of the way pretty quick and just stuck up front and rode my own race and try not to worry about much and just hitting my marks.”

Now with a win under his belt again, Roczen feels it will be a big help for the rest of the season – which won’t be good new for his competition! “It brought back good memories, it felt familiar so that was good and doing it over pretty much the entire distance was great as well, I think it’s going to help me in the future for sure.”