Interview: Yves Demaria on his career and MXGP 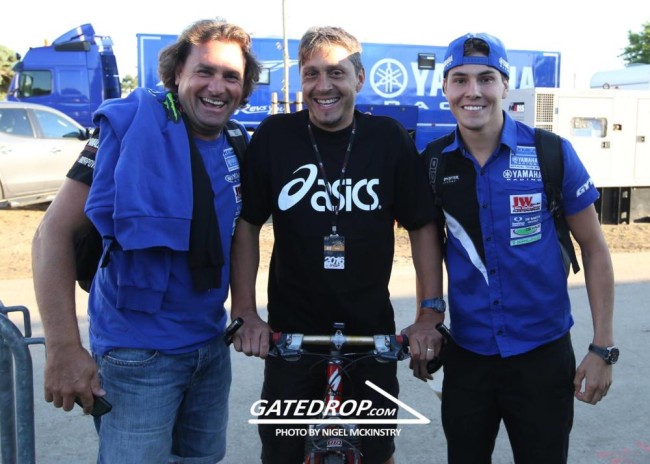 There’s no doubting Yves Damaria had so much talent. The Frenchman chased the dream of becoming World champion his entire career but unfortunately it never happened for him in MX1 or MX2. Plenty of GP wins but Demaria never done enough to win a world title – looking back he’s honest enough to admit he made bad choices and didn’t work hard enough.

Demaria does have three MX3 World Championship titles though which he can look back on with nice memories. Now, the 48 year old is still a regular in the Motocross paddock as he’s working closely with Julien Lieber.

We caught up with Demaria to discuss his career and more.

Gatedrop: Yves, you might have stopped racing at a professional level a long time ago but you still remain in the paddock. Since hanging up your boots what sort of things have you been involved in within the Motocross world?

Demaria: I stopped my career in 2008 and I am directly took the decision to work in coaching. I started working for Yamaha (Christophe Charlier, Arnaud Demeester, Marc Germain), then in MotoGP (Randy de Puniet). I then had the opportunity to work with Kawasaki racing team (Pourcel, Barragan, Boog, Paulin) then I went to Valentin Gillod in 2013 until 2017. Now I am currently with Julien Lieber. It’s really my passion to pass on my knowledge.

Gatedrop: Going back to your career, what would you say held you back from winning a World title in the 90’s because on your day you could beat anyone?

Demaria: Sure, in the 90’s I could have become world champion but I certainly didn’t make the right choices and didn’t do enough work to get the results I hoped for.

Gatedrop: How big was the 1994 US GP win for you? At times it felt like you were the fastest rider in the world at that time especially on rock hard tracks..

Demaria: Yes, it’s true that in 1994 I was fast on the hard terrains but I also won in the sand (Finland). The USA GP was the greatest victory for me during my career.

Gatedrop: Did breaking your leg in 1995 when you took the championship lead change the momentum in your career?

Demaria: In 1995 I broke my leg while leading the world championship. After that I then lost confidence and made the wrong choice to change my bike.

Gatedrop: You were a very good Supercross rider, Where you ever tempted to go to America during your career?

Demaria:  It’s true I loved Supercross but I preferred the European life and I wanted to become world champion. This was my dream.

Gatedrop: What was your favourite GP win and why? Can you talk me through that GP? What other races have you got good memories from?

Demaria: For me it’s the USA GP in 1994, it was the most beautiful victory of my GP career. After that it’s the victory in 2001 at the MX of Nations with France. Finally, my MX3 title in 2004 because in 2003 I fractured the vertebrae at Valkenswaard, that title was a nice reward for me.

Gatedrop: As I mentioned earlier, you are still a regular in the paddock. When you compare the sport now compared to when you raced. What are the biggest changes you notice in the paddock?

Demaria: Compared to my time as a rider the big evolution is that motocross has become very professional. The team structures, equipment, logistics, riders salary and of course the media.

Demaria: The current level in MXGP is impressive in quality and consistency. For sure, the best we’ve seen in the last 10 years.

Demaria: Infront have helped to modernise Motocross, the times have changed just like life. You have to adapt to all these novelties and evolve with them. Today, Motocross is a really professional sport.

Gatedrop: You are working closely with Julien Lieber, what’s he like to work with and what do you think he’s capable of in the future?

Demaria: I have been working with Julien Lieber for 4 years now and the objective is to be in the top 5 of MXGP. He is a rider who has a lot of will and who works a lot even after the injuries. I really believe in him.

Gatedrop: Riders like Stefan Everts, Antionio Cairoli and Jeffrey Herlings are all Motocross greats. How would you describe them all when you watch them ride and also their mentality?

Demaria: These riders are all great champions but above all human men. I have a lot of respect for them.

Gatedrop: What do you expect from Jorge Prado in the future and who else do you see as being the next big thing in the paddock?

Demaria: Yes, Prado is certainly the future of Motocross but he has time and must confirm in mxgp. In France, Tom Vialle is our best hope of being a World champion

Gatedrop: What have you been up to in the past few weeks since the Coronavirus outbreak, do you miss the racing?

Demaria: The virus is very serious. We have to accept that and wait, health is the most important and life is good. We must be patient.