Interview: Richard Bird – it was awesome! 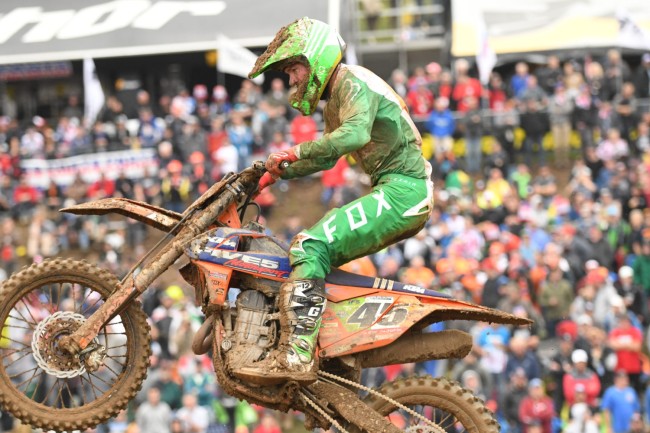 Ulster and Irish MX1 champion Richard Bird got the experience of a lifetime at Red Bud after being drafted in just a few weeks ago as replacement for the injured Stuart Edmonds, to represent team Ireland.

Bird acquitted himself well all weekend in America despite the difficult conditions, and it was his third moto score that ultimately got Ireland straight through to the A final.

We caught up with Bird at the end of the day to get his thoughts on competing at one of the biggest Motocross Des Nations in history and battling Travis Pastrana!

That was a big weekend for you and you were riding really good, how do you assess your two days here?

It was awesome, a really good experience to come over here, the amount of people, the fans, it was unbelievable. I have to be honest, I felt like I struggled a wee bit, I cased that uphill triple yesterday and overstretched my ankle. It was a bit of a struggle today just to get through and the conditions weren’t on our side, but I loved every minute of it. Fair play to Gary and Martin, they both rode fantastic, to finish 14th overall, we couldn’t really ask for much better.

And it was your result on Saturday that got us through to the B final on the tie-break by beating the Ukrainian in that final moto, and you were battling with Pastrana at times throughout the weekend, that must have been pretty surreal!?

It was class actually, we were beside him in the holding area and you should have seen the media all round him and Windham – it was something else! It was class just to experience that alone.

In the heat race he actually jumped passed me on the first lap and I couldn’t believe it when I saw a two-stroke go by me!

After the first two motos I thought we were safe so when it came down to my race it was was a bit of a shock, but at least we got in, that was the main thing so it was.

Bird powers out of a berm at Red Bud. Pic: Doug Turney

I saw you go down on that off camber in the heat race on Saturday, but you got straight back up and into your rhythm and secured the result…

Yeah that was brutal! It felt like I was tip-toeing down it just to get round it, it was so off-camber and that rough. I had tried to square it off a bit to get up tight to get over that table-top, but I lost the front and went down but I got up again and kept riding and got it done.

How did you find the track, was it hard to get used to?

It wasn’t difficult to get used to, it was just the conditions. Goggles were the big issue, I had to pull in in that first race to get new goggles, you get filled in so easy. That bog bit, it was so deep, I had both legs out just to paddle round it! But it was a great experience to come over.

I’ve  seen you riding since you were on 80s, you have put a lot into this sport to get where you are, all that training and riding, so this is a nice reward for you to get to experience all this!

Yeah, definitely, I’d be safer just retiring now and walking away, I’ve done  it! No, to get over here, especially being at Red Bud in America, it’s the icing on the cake really, I’ve had a good year and this has just topped it off.