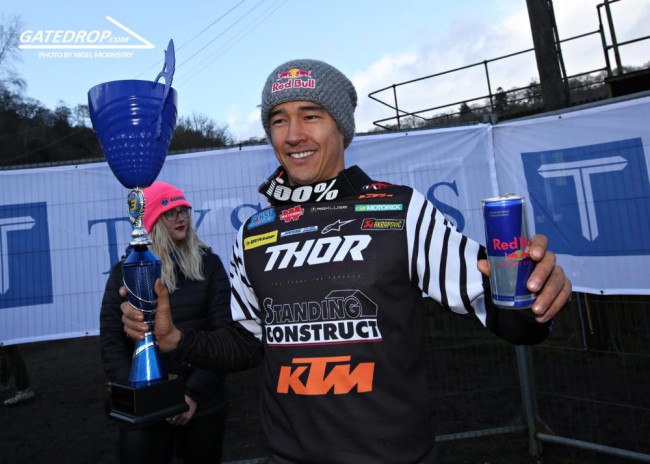 Another member of the strongest (current) motocross nation and something of a recent MXoN specialist, Glenn Coldenhoff is sitting in front of us in KTM racewear. The hurried nature of the factory GasGas deal means that Matterley Basin will be the big unveiling for the latest marque to grace the premier class. The 29-year-old is using his Standing Construct 450 SX-F in the meantime for the final stages of winter prep and an off-season period in total contrast to 2019 where he broke several vertebrae and raced his way back into fitness and form.

Coldenhoff frustratingly chucked the positive momentum from his RedBud Motocross of Nations crowning moment into the sand with his violent and shocking crash at the end of 2018 but is hoping that the five podiums and three wins (including Assen) from the close of ’19 will run into the new campaign. #259 scaled the top fifteen of MXGP in rapid style to snag the bronze medal at the final round. Anything like the same level of form will mean the Dutchman is an outside title contender, regardless of the colour of the plastics.

The question everyone must have for you-

‘Can I back it up?’ [smiles] I don’t really know. I feel very good and had a good winter so far I just had a small injury before Riola [Sardo in Sardinia and the first International race of 2020 at the end of January] and that’s why I did not race there. It was to the same ribs where I broke my back, so I tend to feel any problems quite quickly there. Anyway, it was just one week off the bike and I rode some more in Italy before going to Hawkstone Park. I definitely have more confidence and more experience. It will be pretty interesting to see what I can do from the start.

You’ve always relied quite heavily on confidence, so there must still be some important value in leading those races in Turkey and China and making someone like Herlings work hard to catch you…

Yeah, he also said something like that in an interview; like he was dealing with a new ‘Glenn’ that he hadn’t seen before. I definitely felt really good at the end of last season and everybody recognised that. I think when Jeffrey is really fit then he is hard to beat…but you never know. I will try to be up there every single weekend with the guys. Consistency is very important, and you need to make sure every start is good.

Sure, but I also feel that I underestimated myself. I had a lot of pain until the halfway point of 2019 and then you are always playing catch-up to the others that are fit. There was one moment early-on where we ended up having a five-week break in the calendar and I could work in that period. Only having two weeks on the bike coming into the season definitely isn’t good. In the end I got fit, got better, got more confidence and made the results.

Another obvious question: is a bid for the championship a realistic goal?

I’m not a cocky guy and won’t tell it like that but I’m working my ass off every day to get the results and winning is the best feeling out there. I will go into every single race for it. Championship-wise I got 3rd place last year and there were a lot of injuries [to others] but I was also injured myself. Anything can happen. I had a strong finish to the season and for most of it I was around tenth in the standings and finally pushed up to third, so it is a very long series. I will try to be consistent all year long and hopefully be on the box many times.