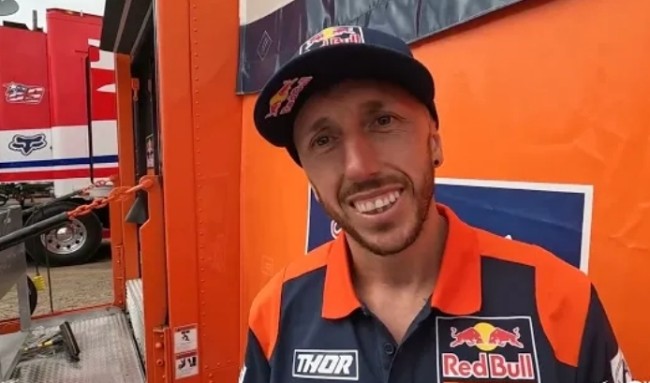 Antonio Cairoli spoke on a number of subjects in his Swapmoto interview including the prospect of doing more races and his performance at Hangtown:

“I’m pretty happy with the weekend but not with the results,” said TC. “I cannot expect much from myslef, I’m just getting some training in now, we are a little bit out of shape, we only prepared for one month.. we miss a little bit of speed in the opening laps of the race, this we will try to work a little bit on.”

“The plan was to do two races then KTM were happy with what we are doing, also I am testing a lot of things for the team and develop new parts. I said okay we are here let’s do another two races, for me it’s nice to get more in the rhythm. After this we have two weeks and maybe I will go back to Italy and do more testing, we don’t know, we will see how the races go and see if we come back. Maybe we will tack a little break and come back at the end of the season, I want to do more races at the end of the season becuase I want to prepare for the MXoN.”

Hear the full interview with Antonio Cairoli on that whip, his condition and his races at Hangtown including wanting to find his speed earlier in the race as well as trying to adapt to the short qualifying session as he talks to Donn Maeda: