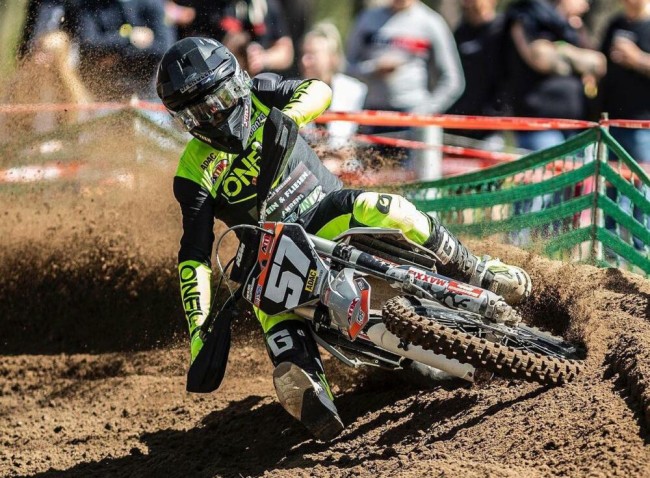 Young Lithuanian rider, Neilas Pecatauskas raced the EMX125 series at Arco di Trento and qualified at the first time of asking which is an achievement in itself. Pecatauskas will now race the series this weekend in Germany and will be hoping to qualify once again.

We caught up with Pecatauskas to discuss his background to the sport, goals for EMX125 this weekend and more.

GateDrop: Neilas, Lithuania isn’t too well known as being a big Motocross country. What’s the sport like in that country?

Pecatauskas: If I’m real, I’ve only raced a handful races there. I’ve born and grew up in Germany so I wasn’t that often over there. For sure it’s not the biggest MX country like Belgium, Netherlands or Italy.

GateDrop: I believe you actually live in Germany. Why did you move there – was it a Motocross decision or?

Pecatauskas: No, not at all. My dad came here about 30 years ago for work reasons but as I said I’ve grew up here and also started my MX career here. To get to such a high level was not the target at the beginning. Me and my dad where just normal Sunday good weather riders and just wanted to have fun. But as I got older and faster we decided to try some bigger races.

GateDrop: Arminas Jasikonis is the best Lithuanian rider, do you know him well and how much do you look up to him?

Pecatauskas: I don’t know him well but for sure he is a idol for me. It would be nice to get to such a level like him one day or even better.

GateDrop: You raced the EMX125 round at Arco di Trento and qualified. It’s such an achievement just to do that – you must have been happy to get through to the main races?

Pecatauskas: It was only my second attempt and I was really really happy. I’ve got so many good luck messages from friends and while riding I thought about them and I think that helped (laughs).

GateDrop: Can you just talk me through your moto’s at Arco di Trento and what’s the level of the EMX125 series like?

Pecatauskas: I was really nervous and got massive arm pump so the races where kinda sh*t. I had two top 15 starts and got passed in like two laps. For example at the German championship or ADAC MX Masters you ride a few laps and get a bit of clean air. In the EMX you have to send it from start to finish. Even the guys that are not qualifying are really fast.

GateDrop: You will race the EMX125 series at Germany – what’s your expectations at that even and are you looking forward to riding the Teutschenthal track?

Pecatauskas: I would like to qualify again and get some decent consistent races. I’ve worked good with my trainer and my condition is really well at the moment. Last year the track was insanely rutty and muddy on Saturday, so I hope the track will be more enjoyable.

GateDrop: Have you any other EMX125 rounds planned?

Pecatauskas: For now sadly not. It’s way to expensive for me to travel that much and not go to school/work.

GateDrop: For 2023 have you got any plans? Is it possible you could do the full series?

Pecatauskas: For now I’m focusing to get good results this season. I hope they will help to get a bit more support for next year. If I don’t get more financial help next year, I don’t think I will be able to race the full series.

GateDrop: What’s it like being a privateer and riding against some of the best talent in the world? I can bet it’s difficult and a team behind you, would be a big help?

Pecatauskas: Like I said I’m going to school and will start to work in a few months. The top 5-10 guys are professionals. Not many can afford or have the luck to get to a big team. I’m only training on weekends and without trainer. Almost everything I can up to date I learned myself. So yes, it would be a big help!

I would like to thank my private sponsors Inta Transporte, Spengler GmbH and AMX Racing for their help.