The Vialle save that wins the MX2 world title? 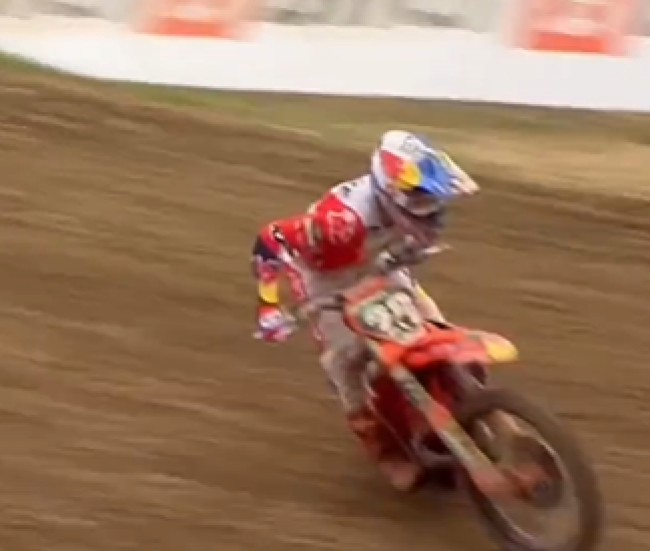 Tom Vialle made an incredible save in France after getting cross-rutted then riding over a hay-bale and somehow not only staying on but also staying ahead of title rival Jago Geerts!

In race two Geerts wasn’t so lucky with two crashes coming home seventh and Vialle is now only 2 points behind with the momentum behind him – but if he had crashed as most normal people would have, his mission to win his second world title would have been less likely!

At the level these two are riding at, it’s small margins, Vialle got away with his mistake thanks to some quick thinking and great balance. Now, the fastest two MX2 riders in the world go head to head in a winner takes all shootout next weekend in Turkey with Vialle and Geerts hoping to stay clear of mistakes under maximum pressure.

They have both shown incredible speed this season but mental strength will be key in Turkey and so far it has been Vialle, when the pressure is on, who makes the least mistakes. Can Geerts, who is going for his first ever world title just to add to the pressure, keep his cool when it really matter, and nail the starts? He will have Benistant and now Elzinga as teammates with Vialle no direct KTM teammate and working as the lone ranger.

But as we saw in France and Finland, when he really had to deliver he was able to do it. Geerts has to respond in Turkey in what will be an incredible, tension filled finale in the world championship for the second year in a row but this year it’s the MX2 class in the limelight. Geerts and Vialle deserve every bit of that attention thanks to the extraordinary level they have been riding at in 2022, it doesn’t get any better.