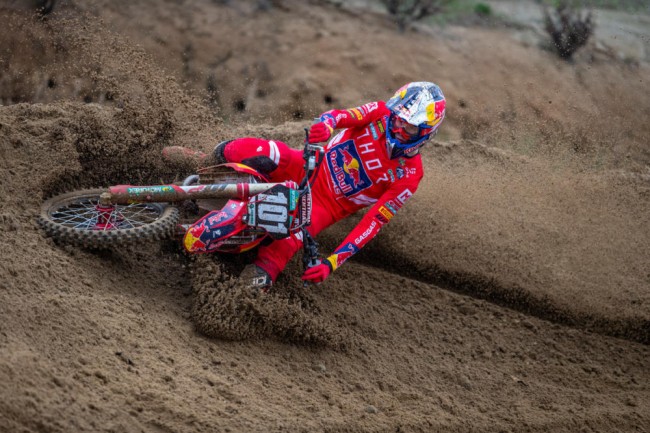 We take a deeper look into Mattia Guadagnini’s decision to step up and race the MXGP World Championship starting this weekend at Riola Sardo in the gnarly sand.

Andy McKinstry: This news have caught me off guard, I really wasn’t expecting this and it has surprised me. It’s clear that Guadagnini hasn’t been at the same level this year after such an impressive rookie season but let’s take a step back… He’s only twenty years old and once Vialle and Geerts move up to MXGP the MX2 World championship will be wide open. Even though Guadagnini isn’t having the best of season’s he is still seventh in the MX2 World Championship and I don’t think he’s been helped by the new bike – there’s still room for improvement there.

Guadagnini is so talented that by the end of the current MX2 season I think he’d have turned it around. However, he’s made the decision to make the move up to MXGP and what’s even more surprising is that he was planning to make the jump up to MXGP in 2023 anyway!

In terms of how he’ll perform in MXGP this year, I actually think he’ll be competitive and run in the top ten – people forever underestimate MX2 and it’s the same this year, that class is very fast and stacked with talent.

I don’t think the Italian should close the door on his MX2 career completely, perhaps he should see how he performs in MXGP this year and then re-assess his options towards the end of the season. With Herlings and Febvre expected to be fully fit and Vialle moving up to MXGP in 2023 it’s going to be more difficult to run at the front of MXGP than MX2… Also, sometimes racing a 450cc can help when you switch back to a 250cc so I don’t think it should be ruled out especially as he has time on his side.

Guadagnini moving up to MXGP will be interesting with little preparation on the 450cc so it’ll be one to keep an eye on but one thing is clear: he has a lot of talent so might surprise and MXGP would then look like a good decision… Factory KTM now need a fill-in rider, Max Anstie, anyone?

Jonathan McCready: This was a shock to say the least! The KTM group have been producing rabbits from hats recently with the surprise announcement of Ryan Dungey to the US outdoors and now the news that Guadagnini is moving to the 450 class.

Guadagnini burst onto the world scene last year in style, leading the championship and winning races plus the MXoN on his way to fourth in the world, but it’s been a struggle this year. Even though recently his riding and speed look back to 2021 level, crashes and bad luck have continued to hamper his results.

I personally thought it was just a blip and some growing pains and, with three years left in MX2 and Vialle and Geerts moving out soon he was, in my mind, a future MX2 world title contender once he gained more experience but this move has come as a complete surprise.

Is it the right move? Right now it’s hard to say, but when you see the speed of Renaux and Fernandez this year in MXGP, Guadagnini should, speed-wise, be fine especially with Jorge Prado as a gauge as a teammate, plus advice from his hero, Cairoli, so the structure is there to succeed.

The Italian has a nice fluid riding style too that should suit MXGP as will his size, but that class is fierce, especially next year with Herlings and Febvre back in plus Vialle moving up, it won’t be easy to reach top five never-mind a podium.

He is also potentially leaving an MX2 World title on the sideline to make this move so soon – but has he got the talent to succeed in the premier class? Absolutely.