Sexton on the MXoN – dream to race it! 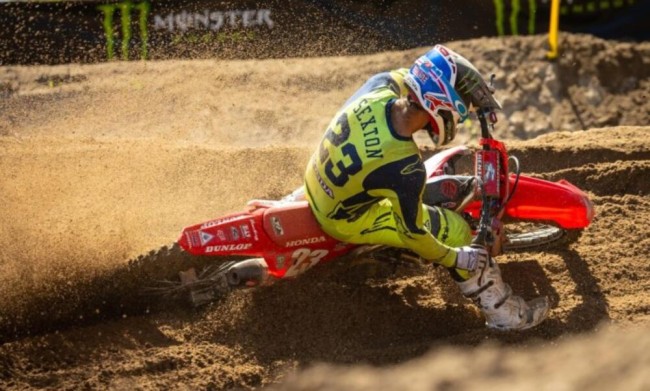 Chase Sexton says it is a dream of his to race the MXoN for team USA and, with his form this season, the young Honda star looks like he will get to make his debut in the famous race at his home track in Red Bud!

“I just want to race it, that’s all I want to do, that’s been a dream of mine,” stated Sexton emphatially in the post-race press conference at Southwick. “I wanted to go last year. Obviously, we didn’t go. But this year being at RedBud, it’s going to be, if it doesn’t rain, probably the biggest motocross race ever. I hope. If I can be a part of that, it would make my day for sure.”

And, laying down the gauntlet for the other countries, Sexton says he wants to go there and win – because the US deserve it. “Like I said, it’s been a race that I’ve wanted to race. Obviously, Eli’s raced it. Aaron’s raced it. It’s on my mind. It’s going to come eventually. We’re just waiting to hear, but it’s going to be a cool race, I think. Hopefully they send the best team. That’s my only thing. I want the best riders going. If I get picked, I obviously want to go there and win and bring home a win for the USA. It’s been a little bit and I think we definitely deserve it.”