Searle on his FatCat win – proud of himself 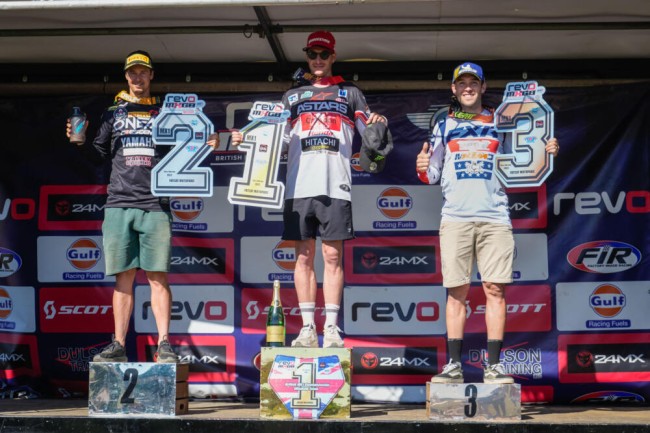 Tommy Searle took his Crendon Fastrack Honda to a crucial win at Sunday’s scorching hot ACU British motocross championship round six at Fatcat Motoparc in South Yorkshire. He backed up a first race runner-up spot with a stunning victory in the second moto to claim the overall honours.

The 33-year-old’s win tally is now seven motos this year, with two double wins and he has a 13-point lead with two rounds remaining.

The victory was especially sweet for Searle as earlier this year he had struggled at an event at the sandy Fatcat circuit, and he vowed then to return in the British championship and take victory.

Searle, who also topped qualifying, said: “I got lapped here at the MX Nationals so we have definitely found some improvement and had a good day. It was a round where I could have lost a lot of points so to win is mega. I dug in and I’m proud of myself.”

The opening moto saw Searle in fourth place then took his time and moved up to second, but couldn’t catch title rival Harri Kullas. Race two saw him take the holeshot and lead for seven laps until but Kullas managed to squeeze by. Searle followed until two laps to go when he put on a daring move to take the lead back which he held to the flag.

In race one I didn’t have the intensity,” said Searle. “But when I put in some hard laps I knew I had the pace. So I dug in deeper in race two as I knew the points were important. Harri probably thought he had it won but I didn’t give up. I felt I had more speed in the bank and it was great to get the win.”

Searle’s team-mate Jay Hague didn’t have such a glorious ride. Hague stepped up from the MX2 class to the blue riband MX1 for Fatcat and, like Searle, had spent some time riding in deep sand on the Continent to dial in the Crendon Fastrack Honda CRF450R. He had a strong qualifying, taking ninth place. Then in the opening race a bike fault halted his charge on the opening lap.

Second time out he came round the first lap in ninth place, then overcooked it in a corner and went down. He remounted 18th then passed four riders over the next seven laps but the extreme heat and tough conditions got the better of him and he pulled out rather than risking a crash. He was still awarded 17th place.