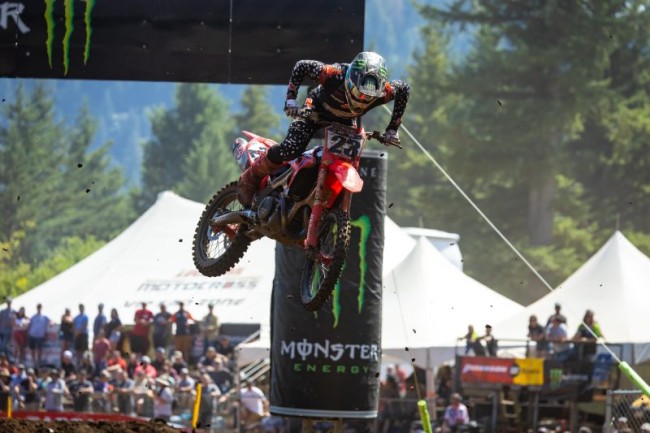 Chase Sexton rode a fantastic race to come from the back of the top ten to catch and pass race leader Eli Tomac – then sprint away to a ten second lead! Sexton had laid down the gauntlet in moto one on a track, amazingly, Tomac have never won the overall at and even Eli couldn’t stay with the HRC Honda rider. Sexton said he found some good lines coming through the field with some bike changes from practice adding to his comfort on the track.

Dylan Ferrandis holeshot on his return before Ken Roczen made the pass before Tomac and then Sexton passed the pair of them. Roczen would end up fading back to sixth with Ferrandis holding strong for fourth with Anderson fourth and Dungey working his way up to fifth.

Dean Wilson, who is rumoured to be on team GB ahead of Ben Watson, made his comeback after injury but could only finish 19th having been out of action for months as Josh Gilbert took a strong 15th.

Chase Sexton caught and passed Eli Tomac for the lead and the win again in race two this time opening up a gap of close to 20 seconds as he took back the points lead by one point with three rounds to go! Tomac tried to come back at Sexton but didn’t have the pace of the Honda speedster on the day and settled for second with Anderson best of the rest in third.

Britain’s Josh Gilbert rode fantastic in race two for 12th one place ahead of the returning Dean Wilson.