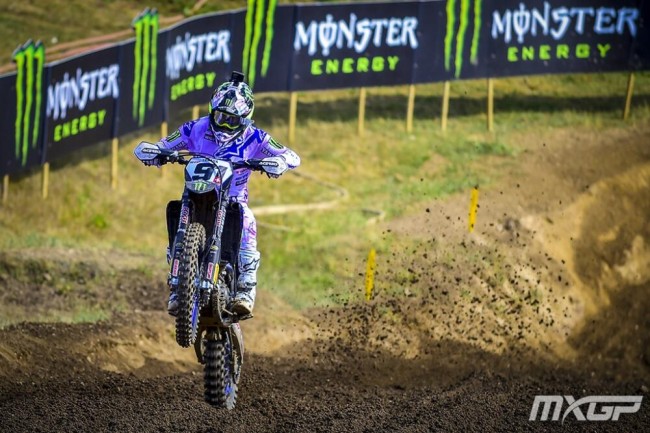 On a track that was a wondeful throwback to the old days of no ruts, slick turns and choppy bumps requiring throttle control and full concentration to pick your passes, it was glory for Yamaha with Jeremy Seewer winning the Grand Prix and Maxime Renaux announcing his return to racing in style with a second moto win!

In race one Jorge Prado took the holeshot but it was Seewer who was pushing the hardest and the Swiss star passed Tim Gajser, then Prado to take the lead and do enough to control the race with a small gap over Gajser as Prado slipped back to fifth with Renaux third and Coldenoff fourth.

In race two it was Seewer leading on lap one until a small mistake in a turn robbed his momentum up the hill allowing Maxime Renaux to take the lead and it was a lead he refused to relinquish! Despite breaking a bone in his back just over a month ago, Renaux showed no ill effects all weekend and, although Seewer never let him get too far away, the Frenchman had it under control to take the race win and keep himself in contention for a top three overall in the world championship despite missing two rounds of the series.

Tim Gajser rode consistent all day but never appeared to tack any risks on a tricky track for third overall with a 2-3 scorecard. He was fast and had the leaders in sight but just wasn’t willing to push that little but extra in either moto to force a win, with the championship leader wisely thinking big picture.

Seewer, who is back up to second in the championship, said: ” It’s amazing to win 3 out of 3 motos, super happy. Amazing to win but one small mistake too many in the second moto while leading the race but Maxime rode really well. The fans were amazing – lots of different flags from different countries.”

There were two contrasting races in MX2 but both had Kemea Yamaha’s winning! In race one Thibault Benistant got the start and eventually checked out for the win after fending off some early race pressure from Simon Laegenfelder who eventually had to settle for second with the second half race pace of the Frenchman proving just too much.

Further back was Jago Geerts who got away outside the top five, but once he got to third played it smart and didn’t risk too much with title rival Vialle behind him. Vialle had a diastrous race by his standards, when, despite a good start he got bumped around in turn two and worked his way from tenth to sixth before, mystifiyingly going back to tenth with Liam Everts riding up on the pegs Stefan style arond Vialle! After, Vialle said he wasn’t happy with his riding or the bike set-up and he was out to make amneds in race two.

This time it was Jago Geerts with a rare holeshot but Vialle was on his tail immediately and didn’t waste any time making the pass on the opening lap to take the lead. From there it was the two fastest riders in the world going at it once again with Geerts stalking Vialle until 10 minutes to when Vialle, under pressure, went off the track at the bottom of a downhill gifting Geerts the lead. But Vialle wasn’t giving up, and despite getting the raw end of the deal in cutting throw the backmarkers, the KTM rider was doing enough to stay with Geerts then gave it everything in the final lap to create a passing opportunity but just couldn’t quite get close enough as Geerts held on in a fantastic race.

Laegenfelder took a strong third with first race winner Benistant coming back from a bad start just inside the top ten up to fourth passing Horgmo near the end of the moto to secure second overall as Liam Everts came from on the ground in turn one all the way back to ninth in an impressive ride.

A delighted Geerts, who now leads the world championship by 8 points going into his home GP in Lommel, said: “The first heat i was struggling a little but. The second heat we made a small change to the bike, finally got a good start again, after ten or 15 minuntes I passed him back and could push towards the end. Finally again a GP win. I’m looking forward to next week, my home GP in Lommel.”