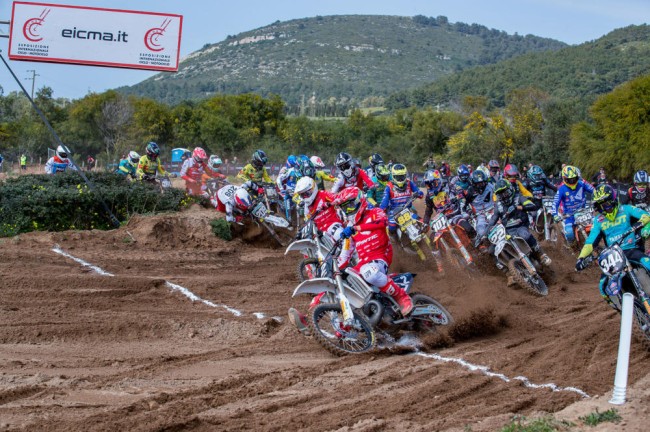 The last round of the Internazionali d’Italia MX EICMA Series 2021 will be held on Sunday in Mantova. The circus of the Internazionali has moved to the continent to make all the preparations so that even the last round of the series will be as spectacular and exciting as the previous two. After the first two demanding sandy tracks, the time has come for the MX1, MX2 and 125 riders to ride on the Tazio Nuvolari track, which has always been the ideal scenario for some of the most spectacular races.

In MX1 Jorge Prado returns, with his official KTM 450SX-F, the Spaniard after the break in Alghero will return to compete, challenging Romain Febvre and Ivo Monticelli with their Kawasaki factory bikes, this year’s surprise in the premier class, Jeremy Van Horebeek with the official Beta Motor, Alvin Ostlund with the Yamaha of the JK team and Alessandro Lupino (KTM MRT).

The MX2 class, which is still a very hard-fought and exciting category, will see the race debut of numerous riders in Mantova with their first race of the season. In between those we will see the Kawasaki riders of the F&H team, Mathys Boisramè, Mikkel Haarup and Roan Van De Moosdijk and the riders of the Honda Assomotor team, Gianluca Facchetti and Emil Weckman, ready to challenge the red plate Nicholas Lapucci, who with his Fantic 250XX will try again to beat the official 250 four strokes, such as Mattia Guadagnini’s KTM 250SX-F, still looking for a prestigious result after Riola’s and Alghero’s rounds. Also the Yamaha Ghidinelli team rider and revelation of this class, Tim Edberg will be there, as Alberto Forato, Kevin Horgmo and Andrea Adamo with their GasGas, of the SM Action Yuasa Battery Racing team Team, as well as a large patrol of riders, arrived from all over Europe.

In 125, the young Norwegian Hakon Osterhagen will always lead the group of riders in the race with his Fantic 125XX and the red plate. His main rival will undoubtedly be Valerio Lata, eager to redeem himself with the KTM managed by the MRT team, after the first victory in race one in Alghero and the DNF he had after the bad crash in the second moto. Always interesting will be following the races of Andrea Rossi (KTM), Nicola Salvini, for the first time on the podium in the last race, and all the other top riders of the 125.

Unchanged format for the races and appointment with the live streaming from 1.10pm CET on the Offroad Pro Racing Facebook page, where it will be possible to choose between the commentary in Italian or in English.