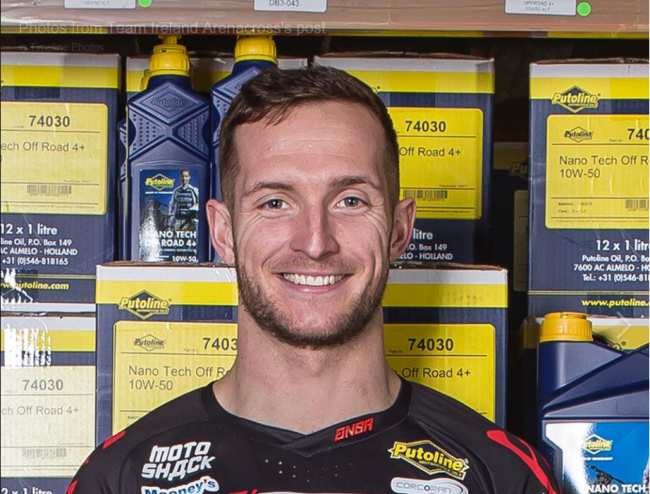 Stuart Edmonds didn’t have his best of years but after a big injury was playing catch up. The Irish rider did improve as the season went on and ended on a high.

In the end Edmonds got the call to represent Ireland at the Motocross Des Nations and in the B final which was brutal conditions, he ended up being the hero. Edmonds was outside the top twenty but worked his way up to second.

Edmonds will be a busy man in 2020 as he’s set to contest in the Arenacross UK series before the Motocross season gets underway.

Gatedrop: Stuart, it’s been three or four years since you last done the Arenacross UK. I’m actually a little surprised to see you’ll do the event in 2020, are you looking forward to doing some AX again and racing in front of your home crowd?

Stuart Edmonds: Yeah, definitely. It’s been a good few years since I’ve done it. I’ve actually been trying to get myself back into it since the last time I done it, I think it was 2016. I just hadn’t got round to doing it, last year after breaking my arm it wouldn’t have been feasible for me to get back into it half-heartedly, I worked on getting myself fit for the Motocross before doing anything else.

For the upcoming season, all the sponsors came on-board, E-TEC, Apico, CCM and a lot of other sponsors. They’ve all kind of come together and it’s allowed us to do the full series so I’m looking forward to it. I don’t know how I’m going to practice for it because there’s no tracks here (laughs). We will try get across to the UK and make use of the indoor tracks over there just to get the feel for it again. I’ll maybe do some BMX practice too.

Gatedrop: Obviously first and foremost you’re a Motocross rider but you have done Arenacross in the past. Just how would you describe Arenacross and how much different is it?

Stuart Edmonds: Well, basically the tempo of the racing is a lot higher. Obviously you have shorter laps but you have a lot of jumps, high corners. You get a bit of a break in motocross in sections so that’s what makes AX a little bit harder. Your timing also has to be precise with the jumps. My background as a kid, I done a lot of BMX’ing and I think that’s what’s helped me in Arenacross with the sharp jumps and stuff. The jumps have never phased me, it’s all about the timing really and mine is quite good because of the BMX background. There’s a big difference in a lot of ways but the fundamentals are kind of the same but you’ve a shorter period from corner to jump and shorter laps. There’s probably a bit more bar bashing as well (laughs). 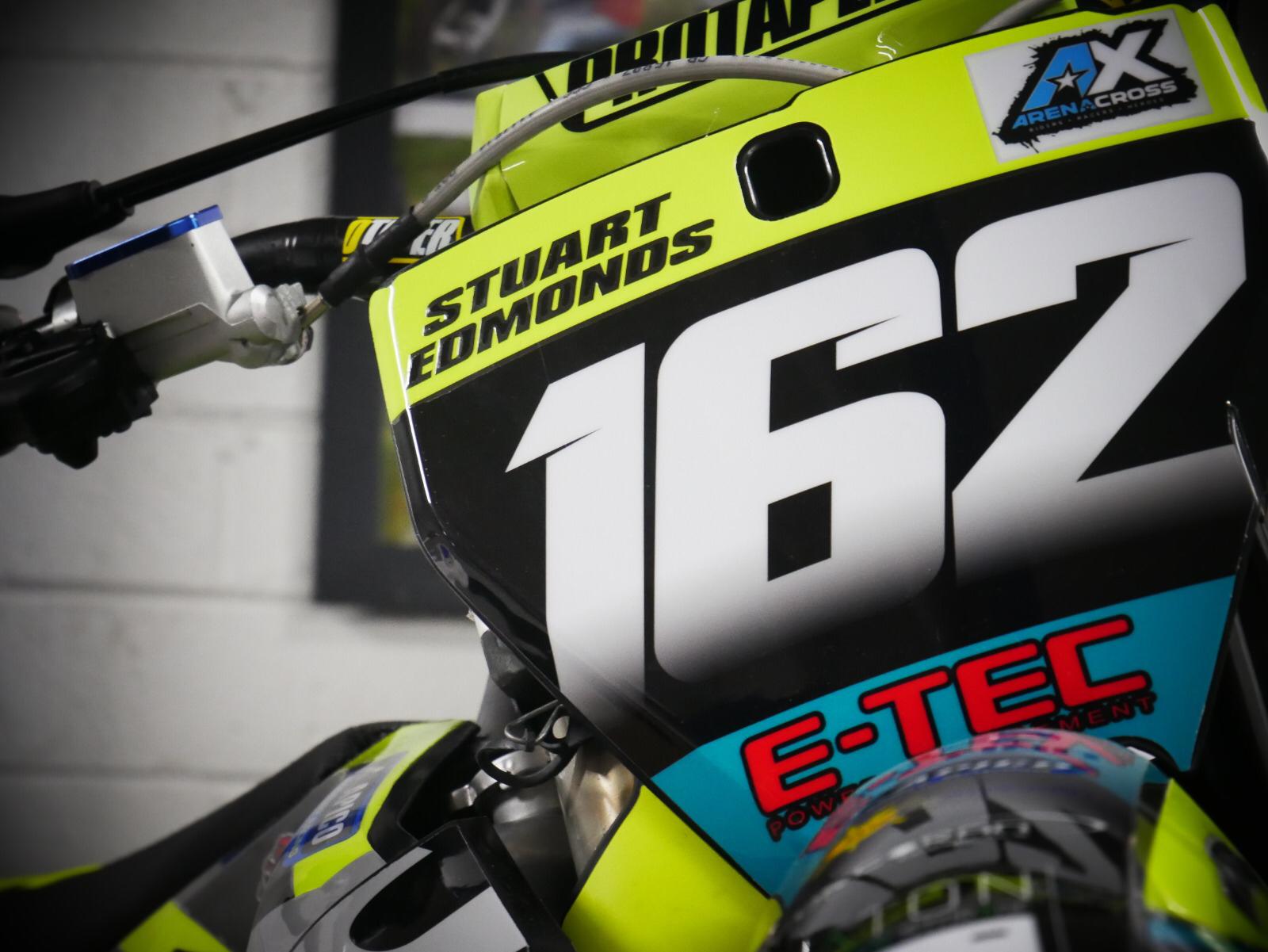 Gatedrop: On your outdoor season, I feel like it was a tough start to the season but at mid season you hit a bit of form and speed which meant we saw a bit of the old Stuart Edmonds back again. At the start of the season you probably weren’t happy but where you happy with the improvement and end of season form?

Stuart Edmonds: I keep forgetting when I look back that I was coming back from a two armed injury, it would put a lot of people back for twelve months never mind six months. Just getting back from that alone was really really hard for me and I beat myself up at the start of the season a little bit. I was over-working, I ran myself into the ground and sick all the time – just because I wanted to pull it all back again and get myself to where I was last year.  I was able to show some form in some results, they weren’t always consistent weekends which kind of annoyed me a bit but that’s what I’m going to work on for next year. Some of the results, I was impressed with myself, I just had to remind myself and more time than normal to hit form but I was happy with some results. I have to look at this year as a year to get back – next year will be my year.

Gatedrop: There was a lot of talk about team Ireland this year. Your usually odd’s on to be selected along with Irwin and Barr. Obviously Irwin retired and not just because you weren’t fast but a lot of the guys at home stepped it up. When you got the call from McCullough it must have felt great to have his confidence behind you?

Stuart Edmonds: Fortunately, I just kept working and really, I didn’t expect to be called because of my injury and my slow start at the beginning of the season. I knew if I kept working hard and got good results that eventually everyone would turn around and see the potential that I can have at the end of the year with the progress and hard work I’m putting in. Unfortunately, there’s still some people that would be down on my area and wouldn’t be backing me instead of backing and helping the team. Instead, they were giving out about the team which is unfortunate and it does all come back to me, I do hear a lot of things but we went over with myself, Jason and Martin.

We give it our best with the way it was, the conditions were just unreal. We had some good luck and some bad luck, Jason had some issues with his bike and Martin had a crash in the B Final but we all pulled it together and give it our all. To be able to be called every year it’s just like being called for the first year for myself. I’ll never get used to it, it’s always that excitement of “oh my god, I’m riding for team Ireland”. It’s the same as it was in 2008 when I was picked, it’s just an unbelievable experience to be able to be picked and ride for your country.

Gatedrop: I think the best thing about you is that you always ride with your heart on your sleeve at these big events and during that B final, that was just phenomenal, can you talk me through that race? It was just crazy.

Stuart Edmonds:  Yeah, I don’t really suffer from nerves. Usually the bigger the events, I think the better I go. If I race a GP, I always seem to go a lot faster than I would at a British Championship or an Irish Championship. The Nations, is a massive event and I always seem to just step it up. I don’t know how I do it, I don’t know what I do differently, I just seem to ride a lot better. As you say, I do ride with my heart on my sleeve, at the end of the day it’s team Ireland and you have to give it your all. If you’re only giving it 50% then you shouldn’t be on the team.

To be able to do what I did in the B Final was unreal. I remember coming round on the first lap and I was twenty-fifth or something on the board.  I just said to myself, “oh my god, here we go, this will be hard work”. I just got my head down, I lost my goggles five laps in because it was that bad, I went through all the rolls. Half way through the race, I was in fourth or fifth place, I was thinking, “I’m going well here!” To be able to say I was second on the last lap was unreal, I just couldn’t believe it myself. To hear that you get into the A final n the end after another rider cut the track, it was phenomenal.  It was some experience!

Gatedrop: Just on the outdoor season next year, there’s nothing official yet but do you know if you’ll stay with Apico Husqvarna yet? Also, the British paddock in terms of rides isn’t great at the moment, it must feel great to have a team behind you that believe in you?

Stuart Edmonds: Each year I think is getting later and later with riders getting picked up and things. Unfortunately, there’s a lot of things ruining the paddock in the British. I am lucky because I was able to sort my deal out last week so I just have to wait on the press releases and stuff to come out. There was a point there, probably about three or four weeks ago that if you asked me what I was doing, I’d have probably told you that I could be hanging up the boots and go into full time coaching with the kids. That’s how bad it is at the minute and trying to get sponsors now is really hard.

Luckily I have a few loyal sponsors who are behind me every year, trying to get new sponsors in and to give me that chance to give it my all – to ride 100%, to train 100%. Not having to focus on trying to get the money for next week, trying to get a job and stuff. The last three years I’ve been working a 9-5, sometimes you have to get up a 4 in the morning to do your training. It’s hard and that’s what happened to me this year, coming back from injury, having a job and trying to train. It got to two months in and I just burnt myself out so that’s something I have to be cautious of next year.  I really want to give it my all, with the team and sponsors behind me, we will have to see how we get on and produce some results.

Gatedrop: The MX1 class next year is looking stacked! We’ll have Searle, Simpson, Bobryshev, Barr stepping up and also Van Doninck. Are you looking forward to battling with the GP riders?

Gatedrop: It’s been a good few weeks for Desertmartin as they’ve announced they’ll have a British Championship as well as an MX National for the first time ever. That’s great news for our sport in Ireland.

Stuart Edmonds: The MX Nationals, it’s the first year it will be run over here so it’s nice to have two races back home. As you know it’s a lot of money for us going across all the time with boats, then you have to worry about the diesel costs. There’s been a lot of people giving off that they have to drive down south all the time from the north, I can understand that point of view but when they have to get a boat and drive down south, then they will understand. Some of the tracks are going to be further away than others and it’s going to be hard but it’s nice to have the two races back home. Maybe if we could get some of the rounds down south, that would be even better again.