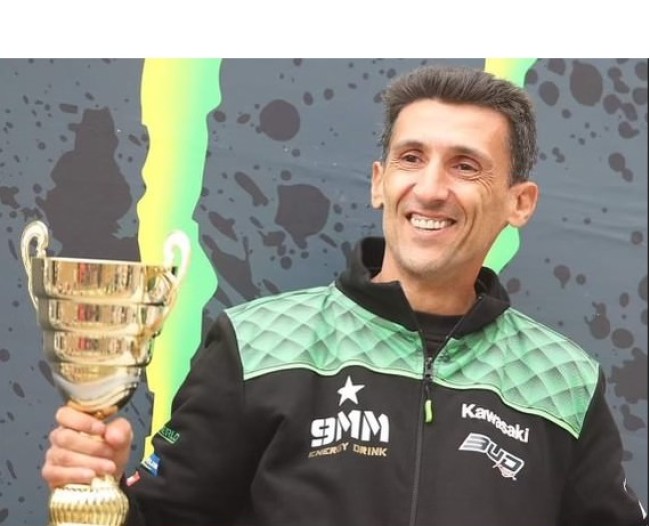 The BUD Kawasaki Racing team have a strong rider line up to contest the EMX250 series this year in the form of Quentin Prugnieres and Eddie Jay Wade. After the first two rounds of the series both riders have showed flashes of what they can do but have the speed for better results.

It’s been a few years the team have ran an MX2 GP rider with the last being Mitchell Harrison so we caught up with Stéphane Dassé, the team manager to discuss the future plans and more.

GateDrop: Stéphane, we are here for the second round of the EMX250 series at Portugal. Overall, I feel the guys had good pace this weekend but perhaps not the luck they needed for better results… but you must be pleased with the pace?

Dassé: We try to find some positive because for sure the results are not what we expected. We would like to see them in the top five or the podium, but the goal is to get both young riders faster. Eddie has made some improvement and Quentin showed some good speed but now we need to put all the pieces together. In the first moto they did a very good start in third and fourth but crashes… the second moto the start was not so good, so they had to fight. We expect much better at the next races.

GateDrop: Eddie Jay Wade is a bright young English talent but has had a lot of injuries in the past… what did you see him that made you decide to snap him up for the 2022 season?

Dassé: Well, for us it was like a challenge because for sure we know he has potential. He was a champion on the 85cc but has had a lot of injuries the last few years. It was a bit risky, but we feel he has good riding with a good potential, so we wanted to give him a chance. In the winter he started a bit late because he wasn’t ready to start early but he is working hard. He is a good kid so we really hope we can help him as much as possible to come back to his best level and give us good results before the end of the season.

GateDrop: Prugnieres went straight from an 85cc to a 250cc and last year was his rookie season in the EMX250 class, the natural step is to race the 125cc, what was the reason for him making this jump? Last year he did show some glimpses of what he could do despite taking that big step…

Dassé: For sure, he did a little bit on the 125cc but very short. He is only 16 now so we know it’s not so easy because the EMX250 class is very competitive. Now is his second year on the 250cc and we expect him to be at the front, he has no excuse and is training hard. We think we have a competitive bike now as well, it’s much better than we had last year so now they need to be at the front as they have what they need with the training. It’s his second year in the EMX250 class and even though he’s only sixteen he needs to be in the top five for us to be happy.

GateDrop: Prugnieres has a fantastic style, I think he’s one of the better riders to watch in the class – style wise he has it so with some more experience and better starts I don’t see why he can’t get some top five results…

Dassé: The biggest problem for Quentin is the starts. The style, yeah, he is strong on the bike, aggressive and nice to watch. We like that too, but the most important thing is to be on the podium.

GateDrop: In the past the BUD Kawasaki team have ran an MX2 GP rider, the focus seems to have shifted away from that but is it possible in the future you could run a GP rider again – especially if you develop one of these younger riders to stay with the team?

Dassé: As a team we don’t have a fixed programme. We adapt our programme depending on the rider progression. We keep it open, now at the moment we target the EMX250 for the best results but if they achieve the results on time, we hope to go back to MX2. We also think about Supercross because we want them to keep their mind open in case one day in the future they can go to the U.S. They need Supercross experience for that so we have an open mind.

GateDrop: You’ve got the BUD facility track, it looks like a fantastic track for prep, it’s maybe not quite Lommel but it’s not far away… I’m assuming there’s some hard pack tracks in that area as well?

Dassé: It’s a good spot, it’s even more sandy than Lommel because Lommel is getting harder. We don’t have the same competition Lommel gets but we have Mitch Evans, Ruben Fernandez and a lot of other riders training a lot with us. It is a good spot and a big change for the riders as well as us. I think maybe it’s a good place for the future.

GateDrop: Just on young French talents, around maybe ten years ago they were more stubborn and maybe didn’t ride so much sand because they didn’t like it… but the latest French generation seem to understand it’s important and they train hard for the sand?

Dassé: Exactly. The French federation also made a lot of effort, and they bring the kids to Belgium a lot in the past. Now we have the BUD Racing training camp and also Loon-Plage in the North of France so people understand more the importance of sand. When we look at the tracks in the World and European championships now even if we don’t have sand, we have a lot of soft tracks that are ripped pretty deep, so this time of riding is very important. Any rider that wants to be good internationally has to be able to ride the sand.