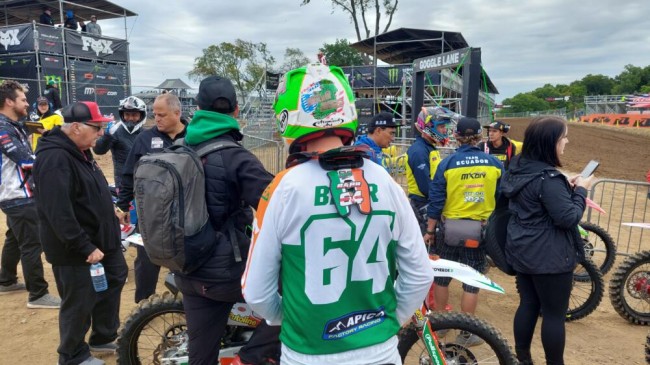 We caught up with an understandably disappointed Martin Barr who had no luck in either of his races at Red Bud despite having the speed to do the job and help get Ireland to the A final.

The Ballyclare native still took time out to talk to us about the weekend and a season that despite some strong results on the Apico Husqvarna, saw him deal with illness all year long.

Martin Barr, disappointing day for you but most of it out of your control, probably your most unlucky des Nations, but you had amazing speed. Third quickest lap in the B final, at one point you were the fastest on the track but two bad first laps situations in both races for you ruined it..

Yeah, it was very disappointing, complete disaster of a weekend really. Coming in I was looking forward to it and feeling good. In free practice although I ended up 19th I never got a clear lap, so I knew I could have got a second, second and a half off, which would have moved me up the leader board quite a bit but that being said, it wasn’t overly important because we had a ballot pick.

The first race, didn’t get such a good jump but the first half a lap was pretty decent and made up quite a few positions and the guy from Finland, he went down in front of me and I had nowhere to go and hit his bike and went head over shi1t. The bike landed upside down and damaged the kill switch so, once I got going the bike kept cutting out in the corners and it was frustrating because I kept on pushing as much as I could but you always had doubt in the back of your mind especially with the jumps here but I just tried to block it out as much as I could and just kept charging because I knew every position counted, but I was still busting out Larocco’s leap every lap and I tried to get on with it the best I could to get back to 23rd. So not ideal, it wasn’t the start we needed and the other two boys rode fantastic.

We shouldn’t have been in the B final to start off with but obviously my result being dropped really hurt so I was disappointed with that one. The B final this morning, I went out for warm-up and did a few laps and felt okay and was quickest in it but never pushed the boat out and probably everybody else was just taking it steady because it was wet and stuff.

The B final even from the very start, even when I dumped the clutch, the bike wasn’t right, obviously I didn’t get a great start and then I tried to bully my way through as best I could and halfway round the lap my bike just completely cut out and tried it, fiddled with the electrics and the rest of it and then eventually got it going again but by that stage I was two laps down. We pulled into the pits just to make sure everything was okay then went out and just rode because you never know in the B final what could happen with other riders. I just went out and rode but again you have that doubt in the back of you mind if the bike cuts out, it’s not ideal. The track was bad but I’ve rode worse, I wasn’t stressed about that and I felt okay once I got going but so disappointing. Mark Mooney has done a fantastic job getting us out, given us everything we wanted and everything has bene really good.

But it’s just unfortunate it wasn’t our weekend and my luck -I didn’t have any whatsoever! It was disappointing to end the season in that way but it’s motocross we will pick ourselves back up and see if we are going to be racing next year. I have no deal in place at the minute, so I just have to see how it all goes.

Just on Larocco’s leap, how was it doing that jump for the first time? I saw you getting over it a few real good…

Yeah, it was mega! I went for it a couple of times but slid out and I was like, nah i want to make sure the corner is right. Then Dean Wilson came by me on a heater so I just tagged unto the back of him and followed him up over it, it was sweet, such a famous jump and now to say that I have done it no problem, and even in the race I was doing it consistently every lap. So yeah, it was cool, real nice to do it, the track, I love the track here, I think they did a really good job coming into it, it was good and deep and the track was getting better, but it’s just one of them we weren’t able to make the A final this year. To be finishing sixth overall the last time I was here in MX2 to this weekend, it’s one extreme to the other, very disappointing.

And finally, just on your season I believe you had illness and energy issues at the start of the year but you were still getting decent results and towards the end of the year you were coming on pretty strong…

Yeah, it’s still on-going, I haven’t been to the gym since February. I have practiced probably 14 times since January so I have just been trying to control it the best I can without saying anything and kept it to myself. Even coming into the first round of the British championship, I broke my right hand the week leading up to it, so it was a struggle to start off with and then with my illness, it’s just been trying to learn about dealing with it, what works and what doesn’t work, I have had blood tests, cameras and now I am going for an MRI scan once I’m back from this so, hopefully, we can get to the bottom of it and get it sorted and see where we are at with it.

Listen to all the team Ireland interviews below: