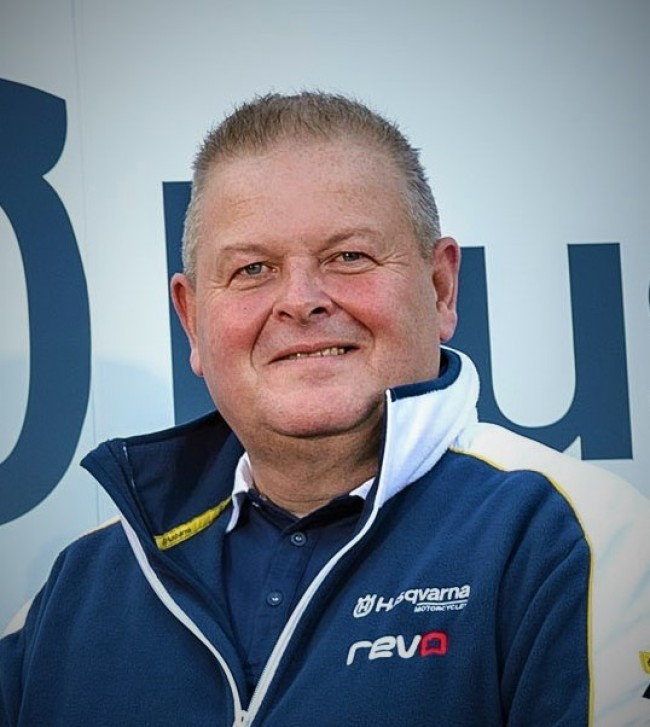 After a successful first season as Revo Husqvarna in 2017, Mark Yates will go even bigger again in 2018 with an assault on the British and EMX250 titles with new signings, Martin Barr and Dylan Woodcock plus keeping the comeback story of 2017, and former European champ himself, Mel Pocock.

We caught up with Mark to discuss the 2017 season and his plans for the team.

Gatedrop: Mark, let’s go back to this time last year. The news was you’d start a new team. Before that you were involved in the Hitatchi KTM team. What was the reason for starting a new team?

Mark Yates: We were our own team prior to joining Roger’s outfit in 2014. Roger’s guys approached us about joining them for the 2014 season to look after the newly signed Mel Pocock and the MX2 program. We built the bikes and ran Mel from our Daventry base and were also responsible for the engine development which was something I was keen to get back into. We had a relatively successful season holding the red-plate for a period in the Maxxis MX2 class before finally finishing 2nd in the championship. In the MX2 GP’s we had some fair results just outside the top ten so all in all not too shabby a season. Sam (Yates) took the role as Mel’s mechanic which was also a start to a long term working relationship. For 2015 I took on the role of team manager for Roger whilst Roger was going through some family issues. That year we had Petar Petrov and Ben Watson in MX2.

We had a great start but it got hard as the season progressed with external friction (not wishing to go into that) and by the time the British GP had come around I decided to step down and just honour the financial support I agreed. Roger was ready to step back in so it all worked out. We left it too late for 2016 so I agreed again to support Roger both financially and with physical resource so we again ran jointly under the ‘Hitachi Revo’ banner, but this time with Husqvarna. During last year my brother in Law who is also my business partner just asked me one day, “why don’t we go on our own again?’ Husqvarna UK were keen to let us take on the MX2 program and that was that. Having full control allows me to run the team how I feel it should be ran and I couldn’t do that by partnering with Roger or anyone else for that matter!

Gatedrop: The team now have their first year behind them. Obviously, things didn’t go so well for Jamie Carpenter but Mel Pocock had a good season. How would you summarize the team’s first year?

Mark Yates: As a team I think we had a great first season and especially around Mel. This was Mel’s first full season back after his injury and we all worked hard to get the bike how he liked it. We became the 2017 Michelin MX Nationals Champions with Mel, he finished 4th in the Maxxis MX2 and of the three European Rounds we competed, Mel had two near podiums.

Jamie started the season with the team and after steady progress I felt he was capable of top 10! But an early injury ended his season and that took care of that! From there we offered to support Jordan Divall. Jordan struggled at the start but began to make some progress. But after the tragic loss of his best friend Steven Lenoir, he seemed to lose the drive and a way to ride anywhere he is clearly capable!

Gatedrop: Just on Mel, just on what he’s done, losing a thumb and managing to not only come back but at a good level. Just how impressive is that?

Mark Yates: Impressive and inspirational for sure.  Mel and Mel snr had been talking to us shortly after Mel’s injury in 2015 to see if Revo would ever go alone. It was going to be another year before we could do something and that’s when I ended up bringing him in the fill James Dunn’s seat after James’s injury at the end of 2016. Mel and his dad know what we put into what we do and felt we could help him. If you looked in from the outside at Mel after his injury, you would have been taking a gamble with Mel after such an horrific injury with many writing Mel off at the time!

In people’s defence, I can understand that but I was lucky enough to stay in touch with Mel and see the grit, determination and never say die attitude that enabled him to plough through his physio, physical training and strengthening of his hand that eventually allowed him to get back on a dirt-bike determined to ride at a competitive level again! Even though a successful season, Mel wasn’t 100% at the start but as the season progressed Mel became more of a competitor having to re-adapt his grip, ride consciously before it eventually became second nature again!

Gatedrop: On next year, the team will expand with three riders, Mel Pocock, Dylan Woodcock and Martin Barr. You must be pleased with the line-up for 2018? |

Mark Yates: Mel’s just resigned a two-year deal until the end of 2019 and so too has Martin. Husqvarna UK were pleased with the team’s performance and how we present ourselves and for 2018, have put additional support in place allowing us to have two full pro-riders. Dylan was looking for change after spending a number of years with Kawasaki and after testing one of our bikes asked if we could support him in anyway. It’s a big jump having three riders but Dylan supplies his mechanic and maintains the bikes leaving us to supply just his race engines.

I think Dylan will excel on the Husky and believe we have one of the best MX2 lines up’s in the British Paddock! I would also like to mention that for the first time we are also supporting and working with a youth rider albeit through a satellite set up. The young Ollie Colmer will join the team and field a TC85 which will be prepared and ran by Jon Giffard. Ollie with compete in the Michelin MX Nationals, the BYN and travel to Australia to compete in the FIM World Youth Championship.

Gatedrop: Also, as well as the British Championship the team will be present at the EMX250 series. Obviously, it’s not cheap to do this but it shows the team has plenty of ambition!

Mark Yates: Ambition/ambitious!!! That’s the second time those words have been thrown our way! Now without being conceited, if we had a small budget, half decent bikes and poor a quality of riders, then yes, we would be ambitious. We don’t and therefore have the same chance of winning as the next guy! So maybe conceited but not ambitious.

Gatedrop: How do you expect all three riders to do in the British Championship and the EMX250 series next year?

Mark Yates: We have two top British Pro Riders in Mel and Martin and I believe either of them can be British Champion, with no doubt podiums. In the EMX250 I also believe that either of them two are capable of the podium and an overall top 3! Dylan is still young with limited experience in the pro class but as the season goes on he will be top 10 and hopefully top 5 as the season progresses. With regard to the EMX250, I would like to think he can run with the top 10!

Gatedrop: Just on Martin Barr, how did the deal all come about? He had his best season in the 2016 season finishing second in the MX2 Championship, what do you think he needs to do to win the title in 2018?

Mark Yates: Martin approached me end of last year when the rumours started we were setting up on our own. At the time I wasn’t in a position to have two fully salaried pro riders, extra mechanics and so on so I couldn’t do anything with Martin. Again, this year Martin started to talk with us and with assistance from Husqvarna UK we managed to put everything together. Martin indeed had a great season and I feel he was riding as well as he has ever done. Martin is professional, very experienced, fast and consistent and needs to do exactly has he done this year! I feel with the bike we can put under him he has the chance of being British Champion as does Mel!

Gatedrop: In a recent press release you stated you want the team to be a World Championship team in 2019, just what are your plans for 2019?

Mark Yates: The plan was always a 3-year step plan after leaving Roger. Year one to roll back on our own, year two to step it up a notch and then year 4 (2019 season), go back to GP’s. This will come down to acquiring additional external funding which is why we set two years to establish ourselves and show we are capable of performing!

Gatedrop: A lot of people would say you’re crazy for wanting to compete at World level with recent manufacturers dropping out but it shows you have the right ambition. Also, what’s your thoughts on the MXGP series and with Suzuki dropping out, what would you put it down too?

Mark Yates: Yes crazy is one word but passion can make you crazy! I think if you can financially afford to do it and you have a passionate and willing team who put 110% into making it successful, why not do it! It’s a shame that Suzuki have pulled out along with a number of other teams who have either pulled out or decided to go into the EMX250 to reduce costs. The bottom line is cost and with the factory teams they are controlled by corporate bean counters and if it doesn’t make sense then they pull the plug. Suzuki blame prolonged recession I believe but racing the MXGP is all cost to the teams and with increased fly-aways, it makes it more costly!

Gatedrop: With the team doing British Championship, EMX250 and some MX Nationals – it’s fair to say the 2018 season is going to be a long one!

Mark Yates: Very much so and to add to that and to make sure we get the best out of the riders, we have just taken on a workshop with an apartment at Jacky Martin’s team facility in Lommel. This will allow the guys to spend as much time available, testing and training at the various tracks in that area. There won’t be much spare time left but this is what you have to do if you wish to succeed and continue into the next season.

Mark Yates: For sure none of this could happen without the support of our sponsors. The sponsors list is many and you know who you are so thank you very much. I would also like to thank Matt Walker and Dave Edwards (Husqvarna UK) for putting faith in us to represent them and also for the support they are giving the team. A special thanks also to Josh Pitts for all his hard work and input. This also wouldn’t happen without the team, so a special thank you to my son Sam who not only preps and runs Mel Pocock, but also deals with the day to day operations and logistics. Dan Giffard (Martin Barr’s mechanic) and then all the guys that attend and make everything work at the track, Ade Levin, Michael Freed, Jason Mills, Paul Old and anyone else I may have missed! Thank You!