Interview: Eddie Jay Wade on being back at the front of EMX250 and BUD Racing 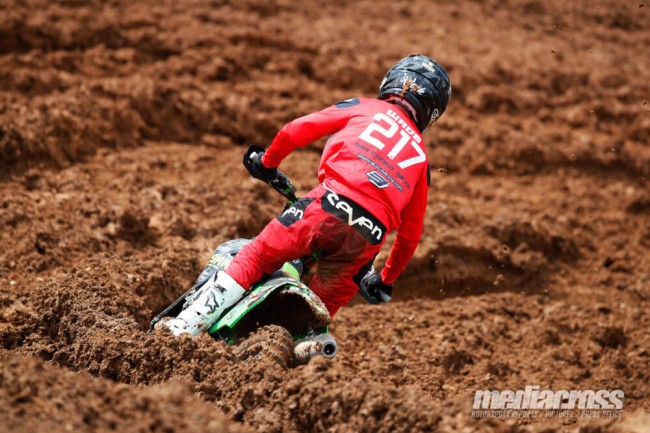 The past few years have been tough for Eddie Jay Wade due to injuries but this year is all change for him after signing a deal with BUD Racing to make the switch to Kawasaki after so many years on KTM machinery. The young Brit is also now living with the team in France but he’s adapting well.

At Maggiora, Wade was looking fast and running at the sharp end of the EMX250 class which was great to see – it’s clear he has talent and it’s nice to see him show his potential, hopefully he can stay injury free.

We caught up with Wade to discuss his day at Maggiora and more.

GateDrop: Eddie, we are here at the EMX250 series in Italy which was two very different days but I feel you showed some really good pace despite two different conditions so riding wise you must be happy with your speed, just a few mistakes…

Wade: Yeah, a very very big step in the right direction. All weekend I have been back up to pace of what I normally should be. I had a good qualifying in second, I was really happy with that but then in the first moto I made a really stupid mistake around the first corner. I stalled the bike and I really don’t know how I did this… I worked my way up to tenth but caught a tough-block and had a bit of a slip up. I was fastest on the track halfway through the moto catching the guys in front, so I was very happy with that.

I was going into the second race very positive; I didn’t work on my starts because it started raining – we were going to practice them but didn’t want to get the bike dirty, so I tried to visualize doing some starts. I got a really good jump, I was the first 250cc out there apart from the two-stroke, they were a bit too fast. The first few laps I was literally just trials riding and was too slow but then I started to ride well and catch everyone again. I need to work on these kinds of conditions a bit more and get used to that technical stuff so I can be right up there again.

GateDrop:  Just on the first moto, before you had the small tip over you were the fastest rider on the track for two laps in a row so it must give you a lot of confidence knowing that you have the pace…

Wade: Yeah, definitely and I was also in traffic. I seen on the pit board that I was the fastest and that give me an extra half a second or something before I caught the next guy. It was a shame about the slip up but that’s something I need to work on. I am very happy and confident going into the next races.

GateDrop: How did you find the track on Saturday and then Sunday? Totally different conditions…

Wade: Yeah, on Saturday it was quite grippy in some places but some sketchy bumps too, it’s Italy and it’s hard pack after all. But today I didn’t even go out for the free practice because it would weigh the bike down so much. On the dry line it was dry but you literally had to stand up the whole way, it was like enduro riding. You had to be very precious and not make any mistakes. It was very very very different. 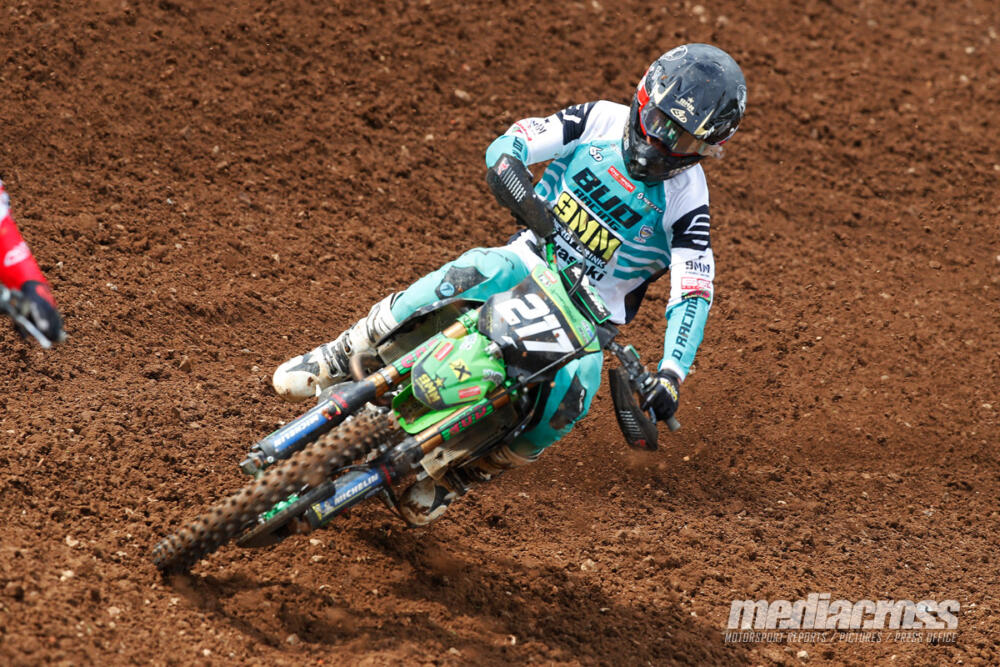 GateDrop: What was it like being right up at the sharp end again? It’s been a long time with a lot of injuries and stuff like that… how did it feel to be up there where you know you belong?

Wade: The last time I was in third in Portugal I got nervous and tensed up. This time I went slower but didn’t tense up, I was just trying to get to grips with the track before making a really big mistake and nearly crashing before the finish. I just wasn’t riding fast enough, I don’t know why and it wasn’t because I was tense, I had a slip up but then I started riding good again.

GateDrop: You’ve obviously been with KTM pretty much your whole career so how’s everything going with the BUD Kawasaki team and living in France – is it helping?

Wade: It is helping and also having the trainer, Thierry, working with him on physical training as well as on the bike training. He picks up on so much stuff and it’s like a family. I live with my teammate and we mess around in the afternoons going down to the beach sometimes… yeah, it’s fun.

GateDrop: You’ve had a lot of injuries, you want good results, everyone does but for you, is it just important to stay injury free for the whole season to build up some kind of form for 2023?

Wade: That is a very very big goal. The past few years I have been really fast at the beginning of the season but I’ve always been trying to win at the start of the season but that doesn’t matter. You can’t win the championship at the first race. Coming into this year, the first few races I wasn’t up to pace but I wasn’t worrying because we have a long season. I just want to keep building – the last races will be the ones that count.