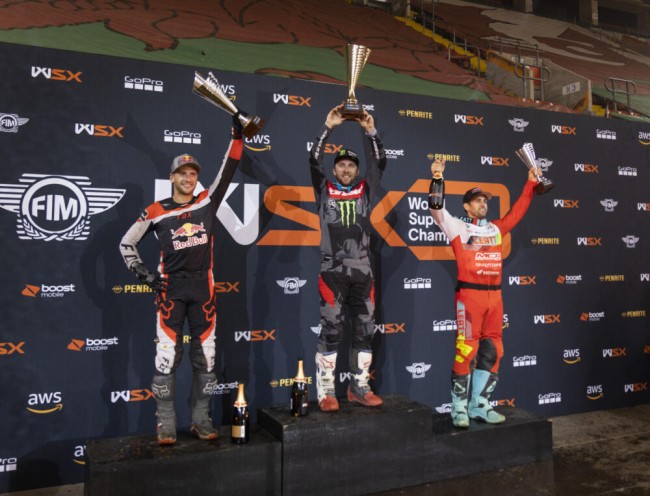 The wait was finally over for world championship racing in the sport of supercross to finally go global, as fans packed into Wales’ national stadium in the heart of the country’s capital. And the world class racing on display was only part of the show, as freestyle motocross shows, a live performance from music megastar AJ Tracey, and fireworks and pyrotechnics wowed crowds that had queued in their thousands.

Tomac – a wildcard this weekend – was third quickest in qualifying, behind Rick Ware Racing’s Joey Savatgy and pace-setter Ken Roczen. And it was Roczen who was shaping up to be the man to beat; winning his heat and setting the fastest lap in the night’s superpole session with a huge quad in the rhythm section wowing fans.

Unfortunately for him, things began to unravel for the German in the GP race main events. Leading the first of three he was caught out by the changing track conditions, crashing and handing the lead to Tomac. He recovered to finish third, behind fellow Honda pilot Vince Friese on the MotoConcepts machine.

It was a Tomac, Roczen one-two in the second of the three GP races, with the pair having to fight through the field, before Tomac made it three from three in the third to cap a perfect evening. While Savatgy was second in the final race, the MotoConcepts outfit bagged two more GP race top-three finishes, with Friese and teammate Justin Brayton taking a third apiece.

With all the points tallied up, Tomac was the clear winner, with Roczen and Friese completing the night’s podium.

“To be honest I started off a little bit slow and Ken [Roczen] rode really well in that heat race and in the superpole I just never manned up for the quad, to be straight up,” world championship leader Eli Tomac said. “That thing was a big nope I was going to stay with the triple-single and it ended up working out. All three mains were a little bit different; obviously I got the gift from Ken in the first and then had to make a couple of passes in the second but I think the most technical part of the night was the dirt: it was tough, very hard pack. I actually almost fell in the third, near the mechanics in that last left-hander. But overall I just enjoyed the whole schedule and the racing. Coming in here I thought that the eight and 12-lap races were going to be a little short but that wasn’t easy and it obviously showcased some good racing and I had a lot of fun doing it. The World Supercross Championship is real: it was a real supercross and nothing was second level with it, it was all first class and it was great to see the big crowd here. It was really cool to see the stadium filled up. To be honest I was looking at it thinking this is a big stadium but I think we filled it pretty well.”

Ken Roczen said on finishing second on the night, “In my superpole lap I wasn’t quite as clean as I wanted to be in the beginning, but the quad was huge and I wasn’t really planning on it but I saw Josh [Hill] do it. What made it really nice though was that it set me up real nice for the turn because I didn’t have to do that single into it with how slippery it was. In that first main event, obviously things happened really quick but from what I could tell there was a tiny line or ledge and the angle I was coming in on, I just wasn’t set up for it. It was so minimal but it just happened so fast. I tried to save it but I couldn’t. It was a bit of a bummer because it felt like it was set up to be a really good race. But it was tough out there and you couldn’t really rely on anything out on track because the berms were really flat. But it made for some great racing tonight.”

“I had pretty good starts and sprinted really hard in the first two mains and that third one I kind of just managed the podium,” Vince Friese said of his night. “I knew these guys were pretty quick all night and I didn’t really want to put up too much of a fight for that, I just secured the podium spot, as I had my eye on my teammate and a couple of the guys who were close on points with me but I got it done and I couldn’t be happier. It’s really cool to be in contention for the title but it’s just cool to even be on the podium with these two guys. It’s awesome for me and I’m trying to inch my way closer to their level. I’ve got a little bit to go but I’ve made some improvement.”

In the SX2 category McElrath, who finished third in his heat race, took the overall victory for Rick Ware Racing and leads the championship standings by a single point after going fourth, third, fifth in the night’s three GP races, highlighting the importance of consistency in the World Supercross Championship’s main event format.

Chris Blose’s second place in the first GP race aboard his Bud Racing Kawasaki gave him a good haul of points that meant he would take second overall on the night, despite taking fourth and eighth place finishes in GP race two and three.

While finishing on the overall podium in third, MotoConcepts Honda’s Mitchell Oldenburg will arguably be going home disappointed after winning the first and third GP races, but a disastrous second GP race – that saw him crash into the back of Pipes Motorsport’s Derek Kelly and take a heavy fall – cost him the overall victory on the night.

Home hero Max Anstie’s British Grand Prix got off to a perfect start, as he won his heat race, coming from behind to hit the front and pull away. The Honda Genuine Honda Racing rider also won the second GP race, but average starts left him with work to do in race one and three, and he could only manage 11th and 10th for sixth overall.

“Winner of the first ever World Supercross Championship SX2 race has a pretty good ring to it,” Shane McElrath reflected. “This was a lot of work to get everything ready to go in minimal prep time, for a lot of guys. Coming here was like, okay, we’re all kind of starting from the same level, and the track was really good. I felt good on the bike and we were really learning every time out there. Here for the first ever world supercross event has been a blast and there’s been some really good competition, really good racing between our class and the WSX class, and I’m very excited for the future of this. It’s big.”

Chris Blose said of the new event structure, “I raced this format in 2019 at the Aus X Open so I was a little familiar with it but it was very similar and very chaotic, and you’ve got to be on it in the main events. I think everyone up here had one bad race and it’s just trying to eliminate those, recover in between the main events. But you know what, being here has been an awesome opportunity and I’m very thankful, and I’m looking forward to the future of the World Supercross Championship, and the many more rounds that are going to come.”

“I need to be smarter than that bone headed move on my part,” Mitchell Oldenburg said on missing out on the win. “I put myself in a bad position on the jump after the guys around me on the start flinched and I fell for it. I came around bad and in the chaos I made a bad move and I’ve got to be smarter than that. But I really enjoyed myself in Cardiff and I had a lot of fun here this weekend. It’s been a blast from the get go and I’m really looking forward to Australia.”

Australian superstar Chad Reed’s return to competitive racing was, sadly, cut short, the former world champion crashing heavily in his heat race. He sat out the rest of the night’s action, with a view to making a return at his home Grand Prix in Melbourne, Australia in two week’s time.