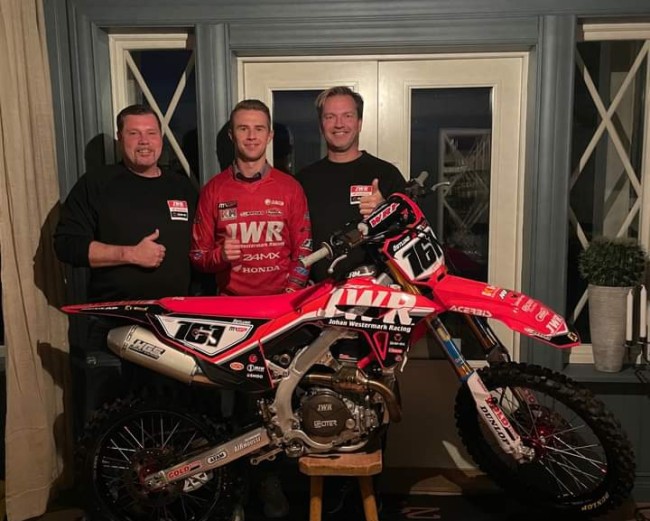 The Swedish 24MX sponsored team JWR Honda Racing is ready to take on the challenge heading into the 2023 MXGP FIM Motocross World Championship with their newest signing, Alvin Östlund. Signing up a Swedish rider for a Swedish team is a very natural development for the team and comes with great excitement. Alvin has represented team Sweden in the MX of Nations as well as gathered a sol- id amount of points with great, consistent showing in the MXGP, finishing overall 20th in 2022 with his 122 World Championship points. The 25 year old Swede has been racing in MX2 and then MXGP since 2016, and brings in a great amount of experience and consistency in the Swedish team. Coming into the team, Alvin has already hopped on his brand new JWR Honda Racing machine is Sweden and is putting in the work to prepare for 2023.

Alvin Östlund (JWR Honda Racing Rider): “I’ve been looking forwards to this new page in the book, as we’re finally able to make it public, that I’ll be riding on the JWR Honda bike. They’re all incredibly motivated and great people to work with, and being able to work with Swedish team is an opportunity I find particularly exciting. I’d like to say thank you to Johan Wester- mark for the opportunity to ride with the team and bring in consistent re- sults. The Honda is already feeling amazing and we’re only getting started with the off-season. Can’t wait to see the gates drop again.”.

Johan Westermark (JWR Honda Racing Team Owner): “It’s fantastic to have Alvin sign up with us and get him on our Honda 450CRF in the MXGP. We’ve known him and talked with him since we first saw him racing years ago in Sweden, and are incredibly proud to bring him home and have him show what he can do on the Honda CRF450”.

Ashkan Aghili (24MX Marketing Manager): 24MX Is incredibly proud to partner up for another year with the JWR Honda Racing team, powered by 24MX. Heading into the 2023 season, we’re looking to work even more closely with JWR and find new ways of approaching people in and around Europe. Signing Alvin felt like a natural progression for us. Alvin will be one of the few chosen 24MX athletes, and will be featured in many of our future campaigns. Not only is 24MX the leader in e-commerce on motocross products across Europe, but we also actively develop gear with the top riders we’re working with, and that’s where Alvin will also step in.

Patrik Erlandsson (Team Coordinator): We’re taking a great step towards bringing Sweden and JWR on another level in the MXGP, signing a rider like Alvin Östlund. I’m looking forwards to seeing where Alvin can take us, and we’ll make sure he has everything he may possibly need to succeed. I’d also like to say big thanks for all of our sponsors who’ve been sticking with us and helped us make all of this happen. Heading into 2023 we’re strength- ening our ties and are excited to represent all of our sponsors on the global stage once again.