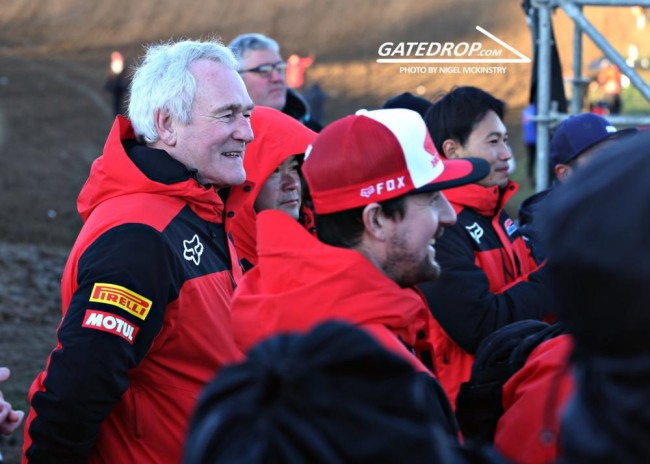 Roger Harvey has been in the rider not a number of years as a rider and after his riding days working with the HRC Honda MXGP team and it’s not to see he’s just as enthusiastic about the sport now as ever.

The HRC Honda team had a superb opening round of the MXGP World Championship with both riders, Tim Gajser and Mitch Evans in the top five. Aussie, Mitch Evans was a revelation on his MXGP debut with his new team – he’s now a full factory rider after spending 2019 with the 114 Motorsports team.

We caught up with Harvey get his thoughts on both riders, MXGP and much more.

Gatedrop: Roger, we’ve had the first round of MXGP and overall you must be happy with two riders in the top five!

Harvey: Really happy. It was a bit of a disaster first race for Tim, I think he got collected up on turn three and then he crashed on the last turn at the end of the race. I think he got nudged so it was an uphill struggle for him in that race so considering it turned out okay. Second race for Tim, that was really good, really strong to put that sort of distance in. First race of the year, everyone is being careful, we appreciate that. With Mitch, a fantastic ride and a good start in the first one, he had good speed and control, his ass didn’t collapse which is great to see (laughs). It’s the first time he’s running with that sort of company in MXGP obviously with it being his first MXGP race so really pleased with that. In the second race, he was really strong once again. In general, we are walking away from here quite happy.

Gatedrop: I was surprised by Mitch today, I hold my hands up to that one. Are you surprised yourself or is that the Mitch you’ve been seeing at the practice tracks? But even still to translate it to MXGP and a stacked class like that.. Impressive!

Harvey: Mitch’ performance, I think he surprised a few people today. It was really strong, he’s going to surprise a few people. You know, we thought let’s start around the top ten maybe get a sixth or seventh place and then a little bit later in the year aiming for top six all the time. After that we were hoping he’d nick a podium and towards the very end maybe he could win a race but after that he’s nearly ticked all of them points off already (laughs). Brilliant, I am well happy with him.

Gatedrop: Gajser, after a few riders in the first moto was able to just dust himself down and fully focus on the second moto and that was just a superb race from him..

Harvey: Tim is really good at that, not to let what he had was a disadvantage bother him for the next time out. He had a good start and he managed it well, Mitch didn’t have such a good start in the second race which made it hard work. He might have sneaked a podium if he had a good start.

Gatedrop: To see Mitch have a bad start and work his way through the pack the way he did, must give everyone more confidence? After the first race I was thinking how he’d do with a bad start but he certainly had all the answers.

Harvey: He come through really well, I couldn’t believe it actually. Someone got me talking and I turned round and he’s gone up four places, I was thinking where’s that come from? I was really impressed.

Gatedrop: What was your thoughts on the track today and do you know what the two guys thought of it?  I loved how rough and technical it was..

Harvey: I think that the guys are happy with it. You know, it’s difficult but we got away with it, didn’t we? With the weather we had yesterday (Saturday) and you think it’s going to be a desperate mudder but that’s how the tracks develop these days. I think the guys liked it but normally if the results are good you like the tracks anyway.

Harvey: It’s risky, it’s so risky, to come to the UK that early. You know what it’s like, you’re only in Ireland and get the same weather as us. We could have been under snow today this early in the year so very risky but I think they got away with it. It’s only the parking that’s a problem, I’d rather this race be at the middle of the year.

Gatedrop: At the start of the year where would you rather the first few GP’s then, fly away races?

Harvey: At the start of the year we always complain about fly away races. Getting everything ready and getting it ready to fly and send out so then you’ve to be ready two weeks earlier again really, it’s always difficult. I don’t know, maybe in Southern Europe, you could look at races there but it’s so so risky to come to the UK in February or March.

Gatedrop: Just on both guys, what’s your championship expectations for them both? I’m assuming for Tim it’s to go for the title!

Harvey: We’d like to see Tim take the title again, yeah, of course. We understand it’s a long year and it’s going to be hard work, there’s a lot of strong riders in there. Tim, I think he’s got the confidence, the feeling, the bike, the new Honda is working really well so he’ll be okay, he’ll be there. Well Mitch, you’d have said the top six to eight to start off with but looking at today’s performance that might need to be re looked at (laughs). We don’t have pressure on the boys, they should just go out to have fun and enjoy themselves. If you’ve a happy rider then you have a fast rider.

Gatedrop: What’s your thoughts on the MXGP field this year? I don’t think I’ve ever seen a class as stacked..

Harvey: No, it’s just unbelievable. When you are looking down in twelfth place and it’s still a top rider, it really is amazing.